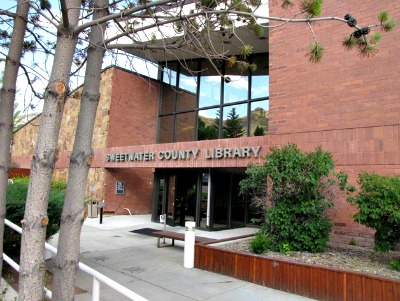 The History of Sweetwater library is fairly basic im afraid, i always like to include a little bit of history for the featured locations i cover but there's not much to tell here. The library opened in 1980 and remains as such to this day.

It was built on the grounds of a small cemetery for the town which was placed there in 1860. It remained as a cemetery for the next 60 years until in 1920 the graves were moved to make room for the ever expanding town of Sweetwater.

I'm sure you have heard the tales of people who have built things on ancient Indian burial grounds and had alot of problems because of it. Building over burial grounds is generally not a good idea to say the least if you don't want to have a little visit from a few past souls. Ancient Indian burial ground or regular cemetery, the concept is the same and there is just as much chance of paranormal activity from those who rest there after they are disturbed.

The stories go that ever since the library first opened in 1980 is has been plagued with paranormal activity.One of the most common forms of activity is the interference with electrical and mechanical items, such as typewriters. All sorts of things happen with anything electrical, from it stopping working completely for short periods of time to them turning themselves on and off.

One of the most disturbing electrical phenomenon is the microphone and sound recorder in the library, which has been known to turn itself on and record feint evps, such as the sounds of breathing and mumbled voices.

Voices are another commonly heard experience. The soft voices of people talking within empty isles and the nearby sound of heavy breathing with no possible source are but a few of the things you may encounter here.

Apart from the typical stories of haunted library such as books flying off the shelves and orbs in photos, there is one more active spirit that sets this library out from the others, and that's the ghost that like to manifest itself in the multipurpose room. It has been seen on a number of occasions when people have opened the door to the room and it has just been standing there, glaring vaguely into nothing before either fading away or walking clean through a wall.

Maybe the reason that this building seems to be so active could be because of the number of times the graves were disturbed. Most of the graves were removed in the initial excavation of the cemetery in 1920 but there were a number of bodies missed for some reason, which were later found through out 1940's and a twice in the 1980's, one of which was a child's coffin.

If you were ever thinking of building anything on the lands of which were once used as a cemetery i would give you a word of advice. Don't, just..........don't.

Sweetwater Library - Back to top