Welcome to the Haunted Hovels section for pictures of ghosts submitted entirely by our visitors. I find that most of the time the best ghostly pictures come from those random snaps where your taking a picture of something else and a visitor "shows up" on the finished result. Here we have plenty of those, as well as some intersting back stories to the more unique pictures we have.

Below is a list of some of the best user submitted ghost pictures with a little of their back stories, these have been submitted "as is" along with an explaination, i have simply made the claims in their descriptions that were subitted with the picture..

Alternatively if you have one of your own ghostly pictures you would like other to take a look at, you can submit them by using the form lower down the page, or you can jump there by clicking

Pictures of ghosts all submitted by our visitors


Lady of the House 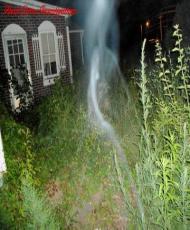 The following was submitted along with this picture:

This picture came from outside a empty house I have investigated for over 2 years now, up to now I have done over 300 investigations, taken in the order of about 60,000 pictures and have over 600 hours of recordings so I have become pretty close to the more then 20 spirits that reside in the house and on the property.

One lady at the house is very friendly, her name is Edna and always telling me thank you and I love you, every now and then when I call for her I will catch a pretty good picture in the form of Ecto-plasma. This is one such time.

On the outside looking in 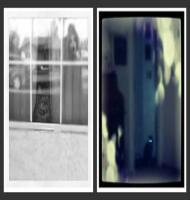 This one was taken by someone was trying to get a picture of their cat peeping out from the curtains. There was no mention of the taker ever suspecting their house to be haunted. 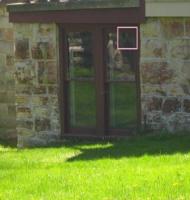 Once inside the main house I had a uneasy feeling and just wanted to leave, once returning home I uploaded the pictures of the house to look closely to see if I could notice anything. On one picture I noticed a figure that was in one of the lower windows. I highlighted it in a box and when I zoom the picture in there is a strange form of some type 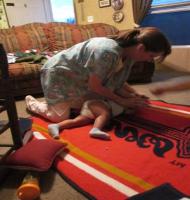 A photo taken by someone watching their mother play with her child, nothing was noticed at the time and there was no one else in the room at the time apart from the two adults and the baby. It appears to be a small arm reaching out for the child. 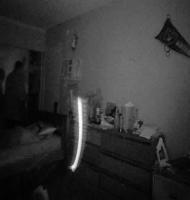 This picture was sent to the user by email though a motion detection camera when he was not home. Im sure you can imagine how scary it would be to receieve such an image of something moving inside your home to find....this. 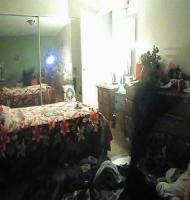 This is from the same person as above but on a different occasion. Apparently he recieves these types of pictures all the time through his email notifications, and even claims to be able to see them sometimes with the naked eye. 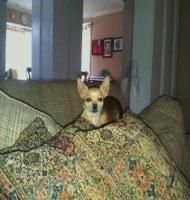 The person who subitted this one claims that he was simply just taking a photo of his dog, and about a month later when browsing through his pictures he noticed a girl in the background. To me this one looks a little suspicious but he claims it to be genuine.

Shadow face on the ceiling 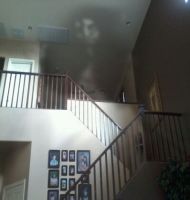 This one was taken by some people who just moved into their new house. They took a number of pictures throughout the rooms and later on when they were searching through them found what appeared to be the face a girl. This one has the clearest image of her.

Girl in the background 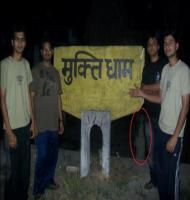 This one was sent to me by a chap who claims that it was simply a group picture with some friends at a site they visited. It does look a little dodgy to me though as the ghost in the background appears to be slightly out of place and very stereotypical, but the person who submitted it claims there was nothing done to the picture. 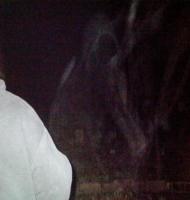 Following was submitted along with the photo:

On 10/18/09 me, and a few friends went to a graveyard to snap some pictures for our ghost hunt when this photo only seemed to be mist on the camera, though when we got back to the house and uploaded it to the computer we realized what it really was. 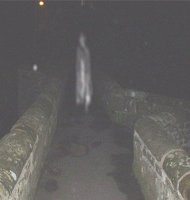 The story submitted with this picture explains how the ghost is the spirit of a child who was murdered here along with her mother. The family is called the Naramore, and little is known about them except they were all killed here. Apparently if you park your car in the graveyard for long enough tiny finger prints will be all over the hood.


Have something to say about this topic?

Do you have something to say about this or do you want to submit a picture? Please share it!

What Other Visitors Have Said

Click below to see contributions from other visitors to this page...

INVESTIGATION PHOTO'S. Not rated yet
ON MY LAST CONTRIBUTION I THOUGHT MY CEMETERY PHOTO'S WERE ON WITH THE OTHER'S Also...they were'nt. also one last photo from the las vegas home. sorry …

INVESTIGATION PHOTOS. Not rated yet
THE PHOTO IN THE CEMETERY WITH THE "FACES ON THE FENCE", WAS TAKEN IN THE OLD PARKVILLE PIONEER CEMETERY IN REDDING,CA IN 2004 OF JULY. WELL......I'VE …

H-m-m-m . . . Not rated yet
The following are my reactions to the above ghost photos: Lady of the House - Love this one AND what the paranormal investigator who shot it (pardon …