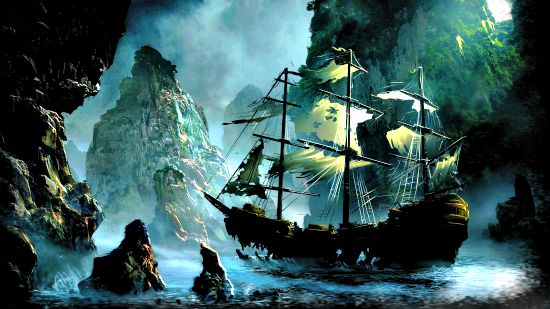 10 of the Most Haunted Ships in the West

Our list of haunted ships starts off with the USS Alabama BB60 was a huge battleship finished during the second world war and was sent immediately into battle. It has seen many battles, which is thought to be the reason behind its hauntings, fending off Japanese bombers and shelling coastal positions, but now sits quietly in the harbor of Mobile, Alabama. Today it is open to the public as a museum and if you would like to read more about its hauntings then click Here!

This battleship was commissioned at the end of the second world war and served a relatively short military career, and now sits in Quincy harbor in Massachusetts as a museum. It has BC come a favorite place to investigate for ghost hunters and has been known to hold ghost tours to the public. If you would like to read more about the USS Salem then click Here!

The Queen Mary is probably the most well known haunted ship in America, if not the world. Since 1967 it has sat in Long Beach, California and now acts as a hotel and museum. Said to be home to many active spirits, to the point where one of the guest rooms is so haunted, that it is no longer rented out to visitors. If you would like to read more about the RMS Queen Mary then click Here!

The story of the Mary Celeste is more commonly associated with being a general mystery as opposed to ghosts, but this hasn't stopped many stories coming up about the ship after it was found. On December 4th 1872 a ship called the Dei Gratia found a ship floating out in the middle of the ocean, so they went to investigate and sent in a boarding party.


The party found the ship completely empty with no signs of a struggle or any significant damage to the vessel. The ships log also contained no clues as to why the ship did not have anyone on board, and if the reason were pirates the ships captain was trained to quickly record any information in his log about this before they were boarded to help find the robbers, but there was no such mention.


The ship didn't have any damage to it apart from some minor flooding which did not pose a risk to the ship and could have come from spray and rain while it was sitting empty. The ship has a total of 10 crew members which had simply vanished, and since they left behind almost 1700 barrels of alcohol which was worth a pretty penny, any sort of robbery can be ruled out.

This fishing boat set course for the south pacific, but 5 weeks after it was supposed to have been back, a search party was mounted. It was unsuccessful in finding the Joyita, but a merchant ship eventually found it floating 600 miles off course with no one on it. The odd thing is that non of the life boats were missing, but several bloody bandages were found on the deck and the radio was tuned into the distress channel. There was no damage to the ship to warrant an evacuation and not a single trace of any of the crew was ever found.

This ship is one of the most famous ghost ships in the world, and has been the inspiration behind countless paintings and stories. The captain, Van der Decken set sail for the East Indies but came across rough seas in the cape of good hope. He wrestled with the ship, supposedly vowing to sail until doomsday if necessary to make it through. The ship is thought to have perished during a storm in the area and all its crew killed.


Today there are countless stories about fisherman and various captains who have claimed to have seen the ghostly ship sailing along, always being described as looking like a deep sea wreck, with no sails and always completely silent.

Another ship found abandoned without explaination, the Zebrina was laden with coal and left for France in October of 1917, though it never made its intended destination. It was thought to be lost to a German U-boat until a few weeks after it went missing it showed up on ther French coast, stuck on some rocks.

It was totally abandoned, with its full load of coal and supplies still intact and not a single sign of violence to explain the crews disappearence. Most people put the crews disappearence down to a German U boat who took the crew hostage and had to disappear when another allied boat showed up before they could do anything with the cargo. This is especially odd since the sole purpose of German U-Boats was to find allied vessels and sink them, and they had no reason to kidnap the crew, and if they did take the crew they would have sank the coal ship before they left so it wasn't used by the allies. Being taken hostage by Germans is the most accepted theory but certainly doesnt straight out answer what happened to the entire crew who nobody ever saw again.