Welcome to our Psychics page covering such questions as are Psychics real, what are they and different types of psychic seeing.

Well, medium-ship is the claimed ability of a person (called the "medium") to make contact with the spirits or souls of a deceased person. The role of the medium is to be the middle-man between a spirit and who it wants to communicate with.

Attempts to communicate with the dead have been documented back to early human history, although medium-ship exploded in 19th century USA and Victorian-era UK - thanks in some respect to the invention of the Polaroid camera and the plethora of supposed ghostly photographs.

Modern spiritualism is said to have formed from practices and lectures by the infamous Fox sisters (Leah Fox, Maggie Fox & Kate Fox) in New York during 1848. So called "trance" mediums Paschal Beverly Randolph and Emma Hardinge Britten were extremely popular lecturers and authors during the mid-1800's.

Unfortunately soon after this period, medium-ship feel into disrepute, thanks to many fraudulent performers, such as the Davenport Brothers and the Bangs Sisters. In fact, one of the Davenport Brothers so called paranormal tricks would be for them to be tied up and placed inside a large box with some musical instruments.

When the box was closed, the instruments would inexplicably play themselves, only for the brothers still to be tied together upon the box being re-opened... Spiritual activity? Seriously? They were eventually found out to be fraudsters anyway, creating the commonly believed answer of no to the question are psychics real!

Many mediums claim to use what's called a "spirit guide". A spirit guide is a highly evolved, wise spirit whose sole purpose is to guide, help and develops the mediums skills. Many mediums say that their spirit guide helps bridge the gap between other spirits and the medium, making communication possible.

Some people even believe that every person in the realm of the living has their own spirit guide to help them throughout their lives. Whether this is true or not, it's certainly a nice thought that there's someone on hand to offer help at all times!

I've heard there are different types of Psychic senses... What are they?

In medium-ship, there are several different terms used for the psychic senses that a medium may use. Some mediums may only possess one sense, some may have a combination; Clairvoyance - I'm guessing you may have heard of this one. Is means "clear seeing" and is the ability to see anything that is not physically present, such as spirits or ghostly apparitions, memories from the spirits life on earth - either in a still form, like a photograph, or like a clip from a movie. Most mediums say that these visions occur in their "mind's eye", which they sense in the centre of their forehead. Some even see full apparition of spirits as if it were standing right in front of them! Clair-audience - "Clear hearing", is the ability to hear voices, thoughts and noises from spirits. Again, some mediums hear sounds in their heads, while others feel as though they're actually hearing someone speak directly into their ear. Clairsentience - or "Clear sensing", means to feel various sensations caused by a presence of a spitit - it could be the feeling that a spirit may be close by, or even the spirit touching you/ Clairalience - This means clear smelling, which for instance, might mean you can sense a strong smell of perfume someone used to wear during their life, or tobacco smoke or even the smell of a fire from a room that was involved in an arson attack years ago. Clairgustance - "Clear tasting". Pretty self explanatory! Same as the above, but for the sense of taste - a spirit could give the medium the taste of blood for example, if they sustained a blood wound during their death. Clair-cognizance - "Clear knowing". This is the ability to know something without receiving the information through any other psychic senses. Often a medium will have this sense when relaying message from the spirit world. The medium will just "feel" the information is right or wrong without knowing!

Some mediums who deserve your attention! 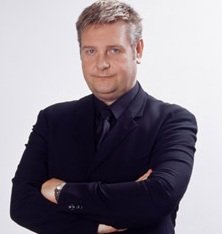 David Wells - Quite simply, the most impressive and naturally talented medium I've come across. Obviously David Wells is probably best known for his work on Living TV's Most Haunted (from series 6 to series 9 - although he featured before this as a guest medium) working along side Derek Acourah, and then taking over the position as main medium when Derek left. You may have also come across David in the newspaper The Mirror doing the astrology section.

Born in Kelloholm in Scotland in June 1960, he apparently discovered his abilities after suffering from pneumonia which sounds a little odd. He was so ill with it he was admitted to hospital and on his second night he found himself in one of the corridors, being told to "get back to bed" by an elderly woman.

He did as he was told and to his surprise he was already lying there! Out of body experience? Astral projection..?

After discovering his gift, he studied astrology and became interested in the Qabalah, to help "ground" his abilities. If you've not heard of this guy - go check him out, he's my number one! 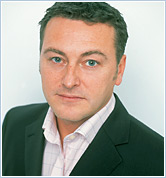 Gordon Smith - Another Scot, born in July '62 in the Gorbals, he worked as a barber for a long time and sometimes called himself the Psychic barber! Gordon has always had a gift to some extent - when he was a small child he used to see shadowy figures in his bedroom, he sometimes "knew" things would happen before they did - to the surprise of his friends and parents. He really started exploring this natural gift at the age of 24 when, at a spiritualist church he had a vision.

Gordon had his eyes closed and saw an oriental man standing in front of him. After thinking "who the hell is this guy?!" the oriental man said "prepare yourself for the coming of the one". Gordon then felt a pulse above his head and then a feeling as though white light was cleansing him head to foot. Gordon has even taken part in case studies by the Scottish Society for Psychic Research. After numerous tests, the society have found that Gordon does have some unexplainable natural talent Gordon has also appeared on a few episodes of Most Haunted, alongside David Wells and the two of them working alongside each other often leads to some very impressive readings and results! so are psychics real? well you tell me, please send us a message if you would like to add anything this page or just wish to let us know what you think!