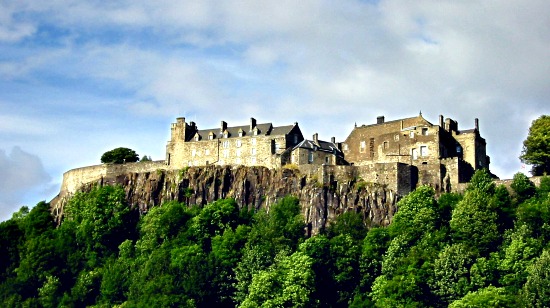 Sitting atop a rocky hilltop, Stirling castle is one of Scotland's most impressive fortifications, both due to its architecture and its history. The site was chosen due to the hilltop being surrounded on three side by steep cliffs, providing excellent defensive capabilities.

The exact date of which Stirling castle was built is unknown, as records don't seem to go back that far, but the earliest records of the castle date to 1110 when a chapel was dedicated here by King Alexander I, and it seems it was already an established royal center at this time as King Alexander died here in the year 1124.

Most of the main buildings within the castle date from the 15th and 16th centuries though there are a few which go back to the 14th century, and the main defensive wall which faces towards the town is from the early 1700's.

The castle has been the center point of much of Scotland's history, with several of Scotland's kings and queens being crowned here, with the most well known of which being Mary queen of Scots in the year 1542.

The castle has also seen plenty of action, with it being besieged at least eight times throughout the various wars such as the wars of Scottish independence, with the last siege on the castle happening in the year 1746 when Bonnie Prince Charlie failed at taking the castle.

The castle today is of course on the national register of historic places as well as being on various other historical listing and is managed by Historic Scotland and is open to the public as a tourist attraction. Please check with the venue directly if you wish to visit to check any seasonal opening times.

With Stirling castle being as old as it is and with all the turmoil its been through in its life, there will surely be a great number of ghost stories to come out of here.

There are thought to be many ghosts which linger within the castle with the exact amount being unknown as different paranormal investigation groups coming up with different answers, but it is thought to be no less than 10.

The most well known and certainly the most famous of spirits to linger here is the ghost known as the Pink Lady. It is thought that this spirit is the ghost of Mary queen of Scots herself, though some people believe her to be the ghost of a widow who lost her husband during one of the castles sieges. She has been seen wearing a long flowing pink dress and walking from the front of the castle to the nearby church of the holyrood. She has also been seen in the governors block and is thought to be responsible for the footsteps which echo from the area when it is known to be empty.

The next ghost is known as the Green Lady and is thought to be the spirit of one of Mary queen of Scots servants. The story goes that one night the queen was asleep in her chambers when one of the curtains on her bed drifted over a candle and caught fire. The servant girl ran into the room and managed to save the queen at the cost of her own life.

Many people have reported to have seen her wearing a green dress and walking through all areas of the castle, possibly searching for the queen to continue to serve her. She has also been captured on a number of photos.

The other active spirit at the castle is that of a highlander, who's identity remains unknown. He has been spotted wearing the traditional Scottish costume, complete with kilt and sporran. He has appeared to many guests of the castle with people often mistaking him as a tour guide, only to be shocked when he turns to walk away from them only to disappear into nothing.

Other paranormal activity at the castle include pretty much anything that can be considered paranormal activity. Electrical equipment is often tampered with, items being moved, footsteps echoing from empty areas, bangs, thuds and objects being dropped fro the above rooms when they are known to be empty are common place here, as are orbs and evp. It really is somewhere to go if you want a good chance of experiencing something supernatural.

Stirling Castle - Back to top