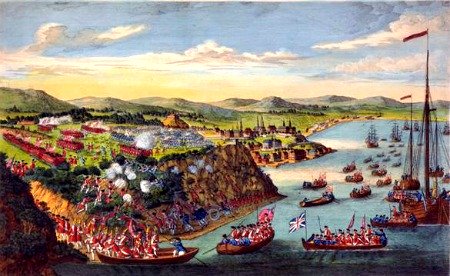 The battle which took place at the plains of Abraham was a turning point in the Seven years war, with the British winning the battle and pushing the French forces out of the city.

Even though the battle involved less than 10,000 on both sides, its importance in the war was very high and winning it made the British's grip on Canada even stronger. The Canadian militia fighting for the French were pushed back further into the country and the battle was a key factor in winning the land and stopping the creation of new France, and forever reserving the country to be known as Canada.

The battle was fought on the land of a farmer called Abraham Martin, hence the name the battle of Abraham. The battle itself lasted for only 15 minutes due to a 3 month siege by the British and the advanced tactics of the British commander General James Wolfe, who was mortally wounded in the battle, dying within minutes of the start of the battle from 3 gun shots to the chest. The French commander, General Louis-Joseph, Marquis de Montclam, was also mortally wounded in the fight, dying the next morning from a musket shot to the lower ribs.

Today the site is a tourist attraction and has a museum and memorials.


Are the Plains of Abraham haunted?

The battle that happened here was only short, but it still ended the lives of over 1000 men, with hundreds more wounded. Battlefields never have pleasant stories and the loss of life is always present, and considering the level of medical treatment in the day wounds such as stomach injuries and blood loss were practically death sentences.

The whole area of the battlefield is thought to be haunted, with it being considered by many to be the most haunted place in Quebec.

The field itself is home to a number of apparitions who seem to appear mostly around mid-day, which is when the battle was fought. Every kind of sighting from a single soldier to a whole line of ghostly troops has been reported, with soldiers from the British, French and Militia forces being seen.

One particular hot spot of the field are the near by tunnels. Within these tunnels one of the most common claims is the strong smell of spent gun power, though a source can never be found. People have also claimed to be touched in these tunnels, with stories of peoples hair being brushed and even someone claiming to have been barged past by an unseen soldier, almost knocking him to the ground.

Plains of Abraham - Back to top