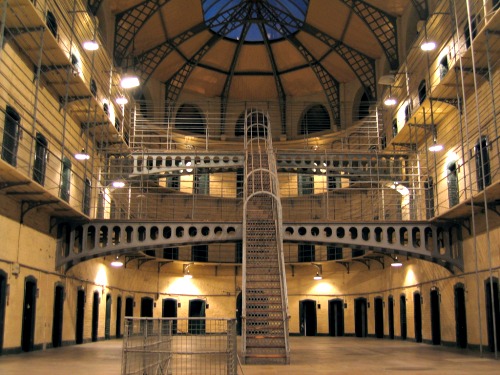 Kilmainham Gaol was built in 1796 and was known as "New Gaol" to give it distinction from the old Gaol it was intended to replace which was just a few hundred yards away. It's official name was the "County of Dublin Gaol" and was run by the grand jury of County Dublin.

The Gaol was well known for being a prison you never wanted to end up in, and when it first opened in 1796 up until the 1820's, execution took place on a regular basis. It seemed the English wanted to set an example for anyone thinking about going against them and it seemed to do just that. The front of the Gaol had a set of gallows and hangings were done in public view quite regularly, publicly hanging a good number of Irish rebel leaders and big names of English opposition.

After the 1820's the hangings became very few and in the year 1891 a small hanging room was built on the first floor between the east and west wings, though this was not used anywhere near as much as when the Gaol first opened.

Early prisons anywhere weren't pleasant, but Irish ones in particular didn't have the funding of their English counterparts and due to the political situation at the time, the English powers treated the inmates horribly. There was also no distinction between the seriousness of the crime of an inmates sex. The general view was a prisoner is a prisoner and that's it. Men, Women and children of all ages were kept together where ever there was space, so a 10 year old child who committed petty theft could very well be locked in a cell with a group of murders. The youngest inmate at the Gaol was put in for petty theft, and he was only seven years old.

This was also one of the prisons were the older inmates who were convicted of more serious crimes were often shipped off to Australia, though the ones who committed the most horrific offenses where taken to the hanging room.

For some reason women prisoners were treated much worse than men for most of the Gaol's life. A report from an inspector in the year 1809 claimed how the women's area was much more overcrowded than the men's, with the men sleeping on iron bedsteads while the women had to lay on nothing but straw,m and this mistreatment carried on for more than 50 years.

When southern Ireland became a free state the Irish government decommissioned the Gaol in 1924 since it was seen as a symbol of oppression and suffering. Since the mid-1980s it has been run by the Office of Public Works and reopened as a museum after being declared an important part of Irish history, it remains as a museum today.

Considered one of the most haunted places in Dublin and as a contender for the whole country, Kilmainham Gaol is very actively haunted. Walking the corridors and seeing the cramped cells can only make you imagine how horrible it would be to get locked up here.

The terrible living conditions combined with the diet and cleanliness of the place was the perfect atmosphere for disease and suicide. If you weren't planned to be hanging or shipped off the the other side of the world, then another inmate might kill you, or perhaps you would die of sickness from the rats and bugs that shared your living space.

The exact number of people who died within these walls is unknown, as records of prisoners no one cared about were sketchy at best, but it can safely be said to be no less than 100, and it seems that some of the people who died here refuse to leave.

The most aggressive activity is thought to come from the spirits of the Irish rebel leaders who were hanged in public during the early years of the Gaol opening. There has been a number of ghost hunting teams and psychics who have visited the Gaol and one thing that seems to come up regularly is the detection of an evil spirit around the chapel balcony area. Who the spirit is will forever remain unknown, but people have claimed to be overcome with a sudden and intense feeling of terror when in this area, to the point they have had to flee the Gaol.

The atmosphere and appearance of the building don't help either, with its echoing corridors and tiny cells creating a sense of worry. Perhaps this is the reason so many people have claimed they have felt being watched and followed by an unseen force, or perhaps it the same spirit responsible for the phantom footsteps which echo though empty areas.

One interesting thing about the Kilmainham Gaol hauntings is they seem to affect children more than adults. many younger visitors have often suddenly paused in sheer terror just before entering the main doors.

Other stories include tales of glowing lights though windows of empty rooms and banging and knocking sounds coming from the other side of doors of rooms known to be empty. The Gaol has been known to host ghost walks and is definitely worth a visit, but please check with the venue directly to check and scheduled walks and opening times.

Kilmainham Gaol - Back to top