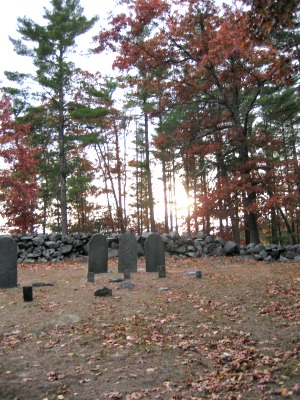 There seems to be no official documentation for the beginning of Gilson road cemetery. Its thought the cemetery was built on an area used to bury a number of bodies before it was officially made into a cemetery and there are a number of unmarked graves on the site.

One particularly odd thing about the location of the cemetery is how isolated it is as there was no settlements in the surrounding area when the first graves were thought to have been placed there. Though the first graves which were placed in the area are thought to be Native American and then later on settlers placed a number of unmarked graves close to if not at the site of the cemetery.

The cemetery is still operating as such and can be found at Gilson Rd, Nashua, NH 03064, United States.

The cemetery is thought to be one of the most haunted places in New Hampshire and with good reason. There have been an alarming number of paranormal experiences here, and perhaps this is due to grizzly tales about its past.

There are several tales which are thought to be the reason the cemetery is so haunted, but whether these are true or not seems unlikely to ever be proven one way or another.

A lot of the hauntings in the area are thought to be because of Native American dead who were buried in the area which was blessed ground, and when outsiders started to use the area to bury their own dead, this angered the spirits and have made some restless. Apparitions of native Americans have been seen on a number of occasions.

Also another commonly sighted apparition is a lady in a white dress who is seen walking from an unmarked grave towards the wall at the back of the cemetery where she disappears, almost as if she is stuck in some kind of animated time loop.

The lady in white is not the only spirit that lingers here, as people have claimed to see apparitions of all kinds, from men and women in various attire from the early 1800's onwards.

One of the other notable hauntings at the cemetery is the appearance of glowing lights, from faintly glowing orbs to more brightly glowing blue and white lights.  Zigzag shaped mists, with almost a lightning patternt to them are the other commonly encountered phenomenon, especially in photos where they were not seen in person at the time.

Gilson Road Cemetery - Back to top