Ghosts of the Royal Mile 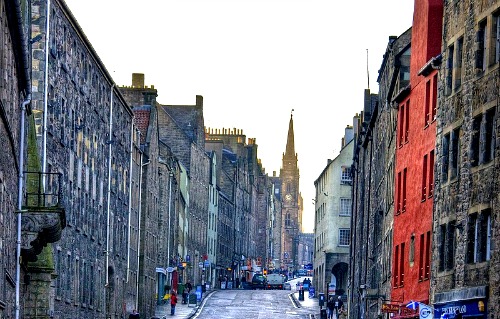 The ghosts of the Royal mile have been there since the miles beginning. The name "The Royal Mile" is the term given to several streets which form the main thoroughfare for the Old town section of the city of Edinburgh.

Running downhill between 2 of the city's major landmarks, Edinburgh castle and Holyrood Palace, both of which are known to be quite haunted, and is made up of 5 streets in total. These are Lawnmarket, Canongate, Abbey Strand, Castlehill and the High street, and together measure exactly 1 Scots mile.

The earliest part of the mile is Lawnmarket, which used to be part of the High street and in a charter of 1477, it was designated  as part of the High Street which hosted the market-place. When it was separated and named Lawnmarket isn't really clear, but on the 1780 edition of Ainslie's map it is shown as a separate street.


Ghosts of the Royal Mile

When or how the hauntings started is unknown, since the land that the city of Edinburgh now stands on has been inhabited since ancient times, and any number of battles, murders or suicides could have taken place here.

The main theory behind why the mile is so haunted is from when the mile first came to be. The old town area of the city was known for being notoriously poor and rife with crime, and the city's governance did little to nothing to help the peasants here.

Things were so bad in the city that when a plague hit, the city rounded up the infected peasants and herded them into Edinburgh Vaults, where they were left to die of disease.

Murders, crime and general poverty are most likely the main culprits behind the ghosts of the Royal mile, and the spirits who linger here are certainly not shy.

The main ghost tale from the mile is said to be that of a headless horseman and carriage racing down the streets, thought to appear on the eve of a disaster which happened many years ago. This to me however sounds a little over the top, as some versions tell how the horse man is in flames as he rides. It is not unusual for the most popular stories to be twisted and exaggerated, but the mile would not get its reputation if it didn't have any "real" ghosts.

If you wish to encounter a spirit here you need only go into one of the miles fine taverns to hear of ghostly tales, or even see one of the many spirits while your in there. All of the buildings in the mile speak of everything from ghostly shadows and objects being moved to full bodied apparitions dressed in everything from medieval armor to world war 2 uniforms.

The mile also hosts ghost tours on a regular basis so if you'd like to hear more of the ghosts of the Royal mile then jump on a tour and see this amazing area of the city for yourself.