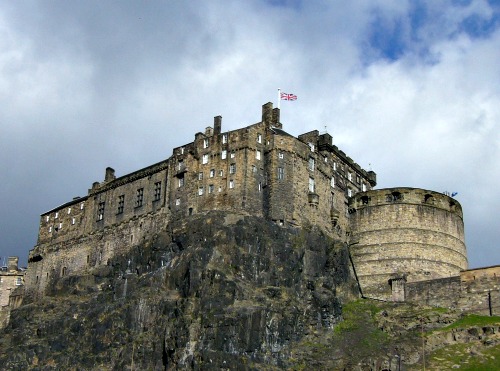 Dominating the skyline of the capital of Scotland, Edinburgh castle is a stunning fortification which has seen many sieges and been home to many royal's. the rock on which the castle stands is actually the plug on an extinct volcano, and has been inhabited since at least the second century.

The details of the earlier settlements on this site aren't very clear, but there has been a royal castle here since the 12th century, during the reign of David I. the castle continued to be a royal residence until the union of the crowns in 1603.

The castle served primarily as a residence until the 15th century when its main purpose shifted from housing royalty to acting as a  military barracks with a sizable garrison.

The castle has seen many troubles in its life, with it playing major roles in  various wars such as the Wars of Scottish Independence in the 14th century to the Jacobite rising in 1745. The castle has been seiged a number of times, both successfully and unsuccessfully but has never been destroyed or torn down after being captured, as so many castle were in wars past.

Today the castle is Scotland's most visited tourist attraction and is host to a number of important functions, such as the famous Edinburgh military tattoo.

The castle is thought to be one of the most haunted places in Scotland, which is not surprising due to its age and the amount of bloodshed it has seen.

There are thought to be many ghosts here at the castle, the exact number is unknown as different ghost hunting and investigation groups seem to constantly come up with different answers, but its thought to be at least 15.

The sighting of apparitions are by far the most common occurrence at the castle, with hundreds of reports every year by staff and visitors alike who claim to have seen the same things.

Some of the most commonly sighted spirits include that of a headless drummer boy who is said to have been murdered in the tunnels under the castle, a ghostly mist-like piper and a ghost dog which is often seen walking through the castle grounds.

The identity of who these popular ghosts are is unknown as these things can never really be verified, but one things for sure and that's that they have many other "residents" to linger with.

The dungeon area of the castle is one of, if not the biggest hot spot for paranormal activity. An elderly man in a brown apron is often sighted within this area, as are the ghost of some very varied prisoners. People have made claims of seeing the apparitions of prisoners dressed in American revolutionary uniforms to French soldiers who were kept here during the seven years war.

The other paranormal activity that doesn't include apparitions includes visitors and staff being touched or pushed, the feeling of being watched or someone standing behind you, unexplained shadowy figures in areas were there's nothing to create them, colored lights shining out the windows of empty rooms, sudden and intense temperature drops, poltergeist activity and people being suddenly overcome with powerful emotions of sadness, fear and nausea.

Edinburgh Castle - Back to top