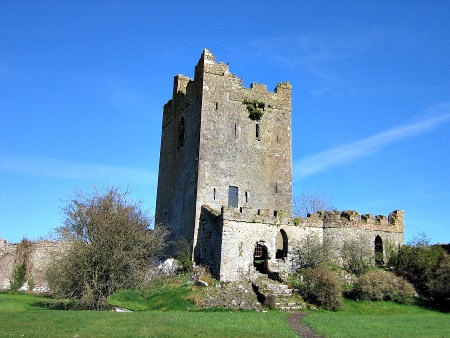 Clonony castle was built around the start of the 16th century by clan McCoughlan in the stunning surroundings of the Shannon harbor area.

Standing only about 50 feet high, the castle was well designed to be a formidable defensive structure, with many defensive loops and flanking towers in the North West, South West and South East corners, though these are mostly gone now along with the northern wall.

The castles most well known residents would have to be the second cousins to queen Elizabeth I who lived their whole lives at the castle and still have their tombstones in the castle grounds, which were discovered in 1803 100 yards from the castle. The inscription on the tombstone reads "Here under leys Elisabeth and Mary Bullyn, daughters of Thomas Bullyn, son of George Bullyn the son of George Bullyn Viscount Rochford son of Sir Thomas Bullyn Erle of Ormond and Willsheere."

Today the castle is a ruin but still has a tower and much of the walls and connecting structures remaining, though there heavily decayed.

The castles appearance is enough to give anyone the creeps, especially at night time, but it is the ghost which lingers here that make it known as being truly haunted.

Apart from some more minor paranormal activity such as the usual orbs and strange twisting mists which can only be seen on pictures, there is thought to be only one ghost at the castle.

He has been described as being a tall, thin man who is dressed in old fashioned clothing, most often described as a sort of medieval peasant clothing and being surrounded by a strange hazy faint glowing light.

Who he is will forever remain unknown as there would have been a large number of deaths associated with the castle throughout its life, but who ever he was it seems he likes to make regular appearances.

He has most often been seen standing in top of the tower at night, and hes been reported many times by motorists who can clearly see his glow from the nearby roads.

There is also thought to be a cave under the center of the castle which was used as a crypt during the days the castle was lived in, and in this cave is said the be a lingering evil spirit, though this is more likely just a camp fire story as opposed to anything more substantial.

Clonony Castle - Back to top