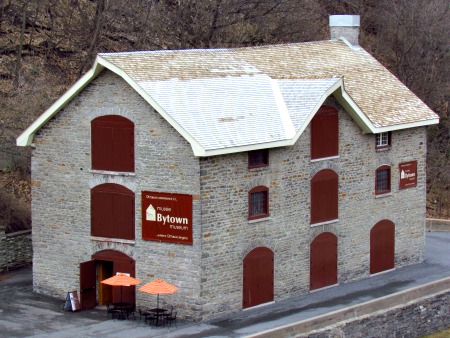 The Bytown Museum has been used as the display center for the artifacts gathered by the women's Canadian historical society of Ottawa to show all the things they've gathered since the year 1898.

It opened its doors as a museum in the year 1951 in an old building which was used as a treasury and a store house during the construction of the nearby Rideau canals. The building is also the oldest stone structure in Ottawa.

A Celtic Cross was erected by the Rideau Canal Celtic Cross Committee at the Ottawa Lockstation "In Memory of 1000 workers & their families who died building this canal 1826 - 1832."

The site has been investigated by the paranormal ghost hunting group the "Girly Ghosthunters" for any activity. It was shown as the fourth episode, of thirteen, of the show in 2005.

Today the museum is still open and holds tours, but if you wish to visit then please check with the venue directly to ensure opening times.

The building is actually close to 200 years old, being built in 1827 as a military supply house on the canal. The most well known ghost to haunt the museum is thought to be that of General Duncan McNab who was one of the many people that died building the canal the museum stands next to.

It would be probable that the building itself could only possibly be haunted by the workers who died nearby building the canal, but it seems that the museum is haunted by some of the artifacts which have been brought to it. There are a number of items in the building which seemed to have increased the paranormal activity when they arrived there, including that of a cast of the hand of Darcy McGee, a politician shot on his way to Parliament.

One of the creepiest things to happen here, and it seems to be on a regular basis is the section were the dolls are kept. Many people have reported that the dolls have winked at them, or their eyes follow guests as they pass by.

It also seems that the very walls of the building are haunted, as there are numerous claims of the walls weeping tears from parts were water could not possibly seep through the stone.

Also whoever is actually haunting here does not seem to be to friendly, as visitors have claimed to have been pushed by an unseen person. This same ghost also likes to poke people in the back when no one is behind them, perhaps just to enjoy the look of terror on their faces when they turn to see no one there.

Bytown Museum - Back to top