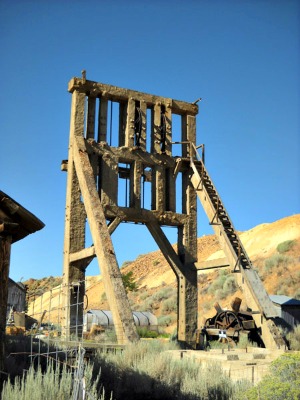 The Yellow jacket mine was one of the mining system along a large strip of ore called the Comstock lode, which was packed with gold and silver.

It opened in the mid 1800's and was one of three major mines along the rich ore deposit which pulled in over $10,000,000 during its lifetime.

Prosperity flourished for the mine between 1868 and 1888 were it extracted a steady supply of ore, and at its peak had almost 300 people working in it. The mine continued to operate after 1888 even though the supply of ore rich rock had greatly slowed down, but then on the morning of April 7, 1869, Nevada saw it worse mining disaster in history.

On one of the lowest levels, 800 feet deep, a fire broke out, destroying a huge area of the mine and causing the deaths of 35 miners. The miners returned to work just 3 weeks later in search of gold in the few still standing tunnels. The mine closed a few years after this as when the ore ran out in the open tunnels its was deemed to dangerous and expensive to reopen the lower levels.

As you can expect from the terrible disaster that happened at the mine, there may be a few spirit which linger from those lost, and these spirits seem to like making themselves known.

Tales from the surviving miners are disturbing to say the least. The fire started 800 feet down in one of the lowest levels and men were trapped in parts of the mine which quickly filled with poisonous gas and smoke.

The shift was changing at the time the fire was noticed so the workers were already on their way back up, which undoubtedly gave them a head start and saved lives. But for 35 unlucky miners it was not enough. Reports of screams coming from collapsing tunnels and men being sealed alive the shafts and choking on the poisonous fumes.

The near by Gold hill hotel is said the be scene of most of the paranormal activity that the mine created. Apparitions of miners wearing work gear have been reported walking around the outside of the hotel, especially around the anniversary of the disaster and always after dark.

As for the mine itself there have been lights witnessed around the entrance to the main shaft, such as in the form of glowing orbs, mainly blue or white in color.

As for below ground a great portion of the mine has been sealed off, but the remaining tunnels are certainly enough to give anyone the creeps from appearance alone. From the few people who have gone deep enough into the mine the faint sounds of the cries of miners were enough to turn them back.

Today the mine is closed and only a few buildings remain such as the main incline chute and head frame of the shaft, also a miners cabin which now belongs to the Gold hill hotel and chute from the top of the hill to transport rock. There is strictly no trespassing and the mine can be very dangerous to enter, so please don't go looking into this without a proper guide.

Yellow Jacket Mine - Back to top