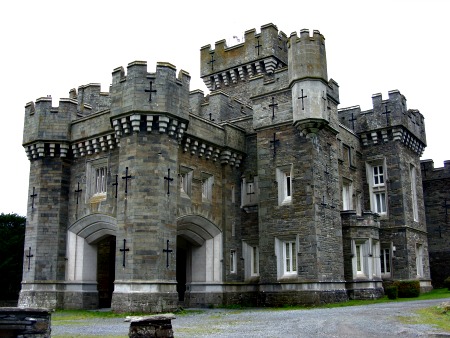 Wray castle is a beautiful Victorian neo-gothic style castle built in 1840 by a retired surgeon from Liverpool named James Dawson. His wife was considerably wealthy and he used her fortune to build the castle along with the neighboring Wray church.

After he died in 1875 he passed it to his nephew, Edward Rawnsley, who's cousin became the Vicar at the family built church. It was the vicar, named Hardwicke Rawnsley who was one of the major players in the creation of the National Trust.

Another key player in the trusts foundation and a famous name who is closely connected with the castle is that of Beatrix Potter, who wrote the book "The Take of Peter Rabbit". She spent a summer at the castle when she was 16 in 1882. Loving the area so much she ended up buying a small farm nearby and after receiving substantial royalties from the sales of her book, she bought large amounts of land in the area, though never owning the actual castle.

The castle was given to the national trust in 1929 by its then owners, Sir Norton and Lady Barclay.

Since the national trust has owned it the castle has served a number of different purposes. Including a youth hostel, offices of the Freshwater Biological Association, and a training college for the Merchant Navy radio officers.

In 2014 the National Trust applied to have the castle open to the public as a tourist attraction. If you wish to visit please check with the venue directly to check any seasonal opening times.

Wray castle could not be situated in a more beautiful spot, overlooking the northern section of lake Windermere and surrounded by woodland. Perhaps its no wonder spirits choose to linger in such a setting, favoring the pleasant surrounding for their eternal stay on earth. But maybe they have no choice but to remain here from what happened to them?

The castle, lake and surrounding woods are all thought to be haunted, but by what or who is unknown. The most well known ghost at the castle is that of a man riding a ghostly white horse. Seen to be made up of a thick mist like formation he has been seen riding the grounds around the outside of the castle walls after dark, charging forward before fading away into nothing.

Such tales to me sound a little camp fire storyish, but the interesting thing about this one is the number of independent witness's who have claimed to have seen such a thing. Below is a picture a visitor to the castle took from one of the upper windows, there appears to be the face of a man in the center of the image. 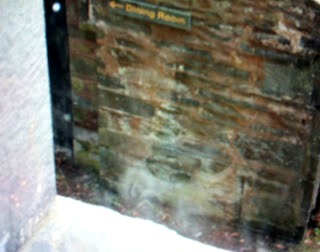 As for the woodland no actual apparitions or voices have been witnessed here, but the hauntings seem to manifest in the form of eerie twisting mists which can only be seen on photos and glowing orb like lights within the trees.

The lake has thought to be the home to spirits or "something" for hundreds of years, with all kinds of stories from water devils to sea monsters. But one story from the lake comes from a fisherman who went out into the waters to fish one day, only to be found sitting in his boat in shock at the shore the next day. He appeared to terrified to even speak and died a few days later. What he saw will never be known, but it wouldn't be the first time someone has seen something in the lake they will remember for the rest of their days.

Wray Castle - Back to top