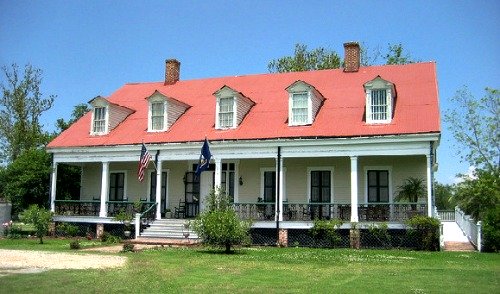 The Woodland plantation was built during the 1830's by a sea captain named William Johnson. Now I say sea captain instead of trader or navy officer because he was known to be a very successful pirate. He was also known to collaborate with other famous pirates at the time such as Jean Lafitte. Together they brought many slaves into the area and William Johnson undoubtedly built his plantation with his ill gotten gains.


William and his four sons ran the plantation very successfully over the next few years, and primarily produced sugar. They had 4 large brick two-story housing units for the slaves to live in, holding about 12 people each, though these housing units were destroyed in the 1960's by hurricane Betsy.


The last decedent of William Johnson who owned the plantation died in 1897, and the heirs sold it straight away to the Wilkinson family who owned it until 1997, but did not actually live there.


The Creppel family bought it at auction the same year and started renovation, with it opening in 1999 as a country Inn.


Today the woodland is still open as a country house and fishing resort, as well as offering functions such as weddings.

Is the Woodland Plantation Haunted?

Now a lot of these plantations are thought to be haunted, especially the ones that were worked by slaves, which to be fair was almost all of them. However the one thing that could make it have a more spooky back story is one that was built by a pirate.


Since he did all of his piracy at sea, mostly due to it being incredibly difficult to sail ships on land, all of the killing he did happened elsewhere. But it is not from his job that the ghosts stem, but more from the treatment the slaves received in his ownership.


He was not known as a nice person, as most slave owning pirates wouldn't be, and he reflected his cruelty upon his workforce, with reports of him executing and beating many of his slaves. It's believed that most of the spirits seen here are that of the past workers who suffered at his hands.


People have reported various apparitions, especially around were the 4 bricks housing units used to stand. Also the sound of soft crying is often reported coming from the trees behind where they stood.


The main building itself isn't without its share of ghosts, with the dining room thought to be a hot spot. One of the chandeliers still there today is thought to be where Pierre Le Fleur, who lived briefly at the house, hanged himself after running out of money.


The dining room is the next area thought to be very haunted, with reports of lights turning on by themselves and unexplainable cold bursts of air.


Perhaps this is from the slaves or the people who died here when it was used and a storage site for illegal alcohol during prohibition, but there are simply to many stories of this place from to many people to dismiss this as another camp fire style location.