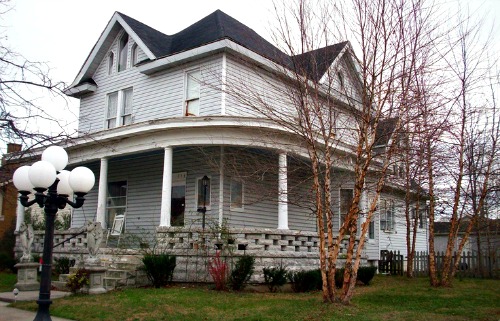 Records for who built the Whispers estate seem to have been lost, with the earliest documented mention of the completed house being in 1894. Shortly after in either the year 1899 or 1901, depending on which source you are referencing, it was purchased by Dr John Gibbons and his wife Jessie.


Dr Gibbons was known as good man, with him even taking in orphaned or abandoned children to be raised in his own home. He also had his doctors practise on the first floor and remained treating the local townsfolk for 26 years.


After the ownership of the Gibbons the house went from owner to owner, with no one staying in the property for any substantial amount of time, with various periods of abandonment in between. A new owner who bought the property in 2006 allowed various paranormal investigation groups to conduct research through the property and it was today's owner that was in one of these groups.


After coming back every weekend's for 4 months they contacted the then owner about purchasing the property. Today they still own the Whispers estate and it is often open to the public as a rather famous local haunted attraction.

Is the Whispers Estate Haunted?

When the building was built it was just known as another house, and the name Whispers estate didn't come into being until 2006 when many guests to the property reported hearing people whispering in empty areas of the house.


As for the activity that goes on here it would be faster to list the things which haven't been reported. The house has all kinds of stories about it, including full bodied apparitions, Strange voice phenomena, the most common of which is the whispering, unexplained smells and violently shaking objects such as door knobs and furniture.


The house is also locally famous for the vortex which is supposed to be in the centre of the house, though no one has seemed to have come up with a reason as to why one would be there.


As for why the ghosts are there the house certainly isn't without its tragedies. The first loses started almost straight away when the Gibbons opened their doctors practise within the house and started to take in orphaned children. Dr Gibbons was known for being a caring man and a good doctor, but with medical knowledge being what it was in the day and with the lack of basic things such as antibiotics, many people would have undoubtedly died within the house, as everything from check ups to amputations were carried out here.


There is even a story which various psychics have come up with who visited the property, claiming they have sensed a burial pit on the grounds which contains amputated body parts and organs, a claim which would have a good chance of being true, since these operations would have taken place here, though it hasn't been found yet.


As for the children who Dr Gibbons took in some of them unfortunately also met their end within the house. The first being a 10 year old girl named Rachel who somehow started a fire on the front porch and badly burned herself, only to die of her wounds 2 days later in an upstairs bedroom. People have claimed to have seen her apparition running along the upstairs landing and standing over people who lay on the bed in the room she died in.


A 10 month old baby was the next to die from the children he took in, she passed away from unknown causes in the master bedroom and people have reported the smell of baby powder and crying coming from inside the room when the door has been closed.


Dr Gibbons wife, Jessie also died in this same room from pneumonia, and many people who have slept in this room have claimed to have been awakened during the night to the sound of heavy breathing and wheezing.


The list of tragedies does not end here for the people who lived in this house, with a man in his 50's suddenly dying from unknown causes in the upstairs bathroom, and a boy who died from falling down the main stair case.


As for the vortex it is thought to be spiralling up from the centre of the house right into the attic, a room which anyone brave enough to sleep in has reported being woken up by a violently shaking door knob, or horrible nightmares.


There are also countless stories of orbs and shadowy figures captured roaming around, an EVP is frequently picked up by investigators.


The house has been featured on many documentaries, books, magazines, radio shows and pretty much anywhere you can share a good ghost story. This place has so many tales to it that its either one of the most haunted places in the county by far, or one of the best hoax's. The only way to make sure would be to go and see it for yourself if you're ever in the area, though personally there's no way I'd be staying in that attic room.