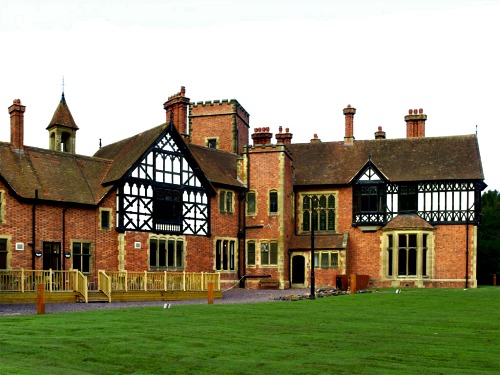 Standing in the village of Llangollen, Tyn Dwr hall was built by an Iron master named John Dicken in the early 1800's

The area had a lot of land to sell at the time and John quickly fell in love with the area, buying up almost 1200 acres of land, including a large portion of the Berwyn mountains. The area was perfect to build a luxury holiday home for him and his family and he immediately began the process of construction on the hall after buying the land.

Included on his enormous plot of land were five farms, with the nearest to the hall being Tyndwr farm.

The land was perfect for his dream getaway home and the ground were even home to the biggest Yew trees in Wales, which attracted many species of wildlife.

Today the Hall is now used as youth hostel were children can come and stay for weekends and take part in the various activities on offer.

An old looking building which is frequently packed with children on camp is going to have a lot of spooky made up camp fire stories to go with it. The only thing is that the stories which are told about this place have repeated them selves through the lips of many people who have been here and claimed to have experienced the paranormal activity first hand.

Many visitors and staff alike have claimed to have seen or heard the spirits which linger here, and below are some of the most commonly reported ghostly goings on.

During world war two many country houses were used to house children who were evacuated from the cities in case of air raids, and Tyn Dwr hall was no exception. It isn't thought that any of the children died while staying at the hall but this hasn't stopped many people from seeing their apparitions playing in the rooms, along with the sounds of laughing coming from empty areas, with room 9 and 10 being a hotspot for this.

Rooms 1, 2 and 3 also have reports of the children being in them, along with the presence of a female ghost who seems to like to push people as they come through the door way and is thought to be responsible for the very uneasy feeling people are suddenly overcome with when in the room.

Room 2 is also said to be home to a strange green tinted mist which appears near the window.

The next ghost is not confined to one area. He is believed to be an old game keeper to the property and many people have claimed to have seen him dressed in his old style keepers cloths. There was even a guest who upon checking out asked who the gentleman dressed in the costume was, as she had had an interesting conversation with him about the local wildlife, only to be told there was no such person on site.

The billiards room is another hotspot in the hall, with the sounds of footsteps on bare floor boards often coming from the room when its empty, even though the room is fully carpeted.

There is also the presence of an unfriendly male spirit here, believed to be responsible for the sudden feelings of intense nausea and temperature drops when people enter the room. Has has also been known to move objects, with a chair by the window being shoved across the floor in front of several guests.

The dining room is another hotspot for unusual sounds, with noises of a long flowing dress being dragged around the room with no identifiable source.

The site has become a favorite with paranormal investigation groups with some psychic's even detecting murders and an evil force within the building.

Tyn Dwr Hall - Back to top