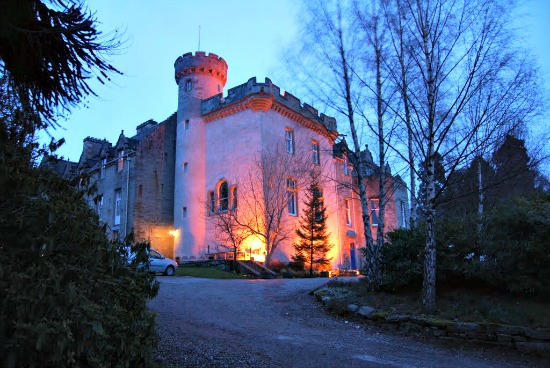 Tulloch Castle Is thought to date from the mid 16th century and was most likely built by Duncan Bane who was given the title of barony of Tulloch in 1542.

On Henry's death in 1781 the Tulloch estate was inherited by his younger brother Duncan Davidson who was in turn succeeded by his son Henry (1771–1827), grandson and great-grandson Duncan Henry Caithness Reay Davidson (1836–1889), who was the father of the last Davidson of Tulloch, Duncan (1865–1917).

The castle finally left Davidson ownership in 1917 when the last direct descendant of this family, Duncan Davidson, died and left the castle to his daughter and her son, Colonel Angus Vickers, of the Vickers aircraft company.

After serving as the Vickers' family home for several years, and as a hospital for casualties of Dunkirk in 1940, Tulloch Castle was purchased by the local education authority in 1957. It was used as a hostel for students from the west coast of Scotland who were studying at Dingwall Academy until 1976.

After this, the castle fell into disrepair until it was renovated and converted into a hotel by local family, the MacAulays, in 1996. Now part of the Oxford Hotels and Inns chain, Tulloch Castle is used as a hotel and conference center. It played host to the official Clan Davidson Gathering in October 2007.

The castle is thought to have many ghosts but the exact number is unknown as different investigation groups seem to come up with different answers, but it is thought to be around ten.

The most famous of these is known as the "Green Lady" and her portrait hangs within the great hall. Her exact identity is unknown but she is thought to be that of Elizabeth Davidson, the daughter of Duncan Davidson who was the 4th Laird of Tulloch.

Her story goes that she went to she her father one day and walked in on him in when he was in a very awkward position with a female, in her embarrassment she hurried down the steps and slipped, hitting her head on an edge and dying on the spot.

She has been sighted so many times over the years that there is a bar within the castle named the "Green Lady" bar in her honor. She is also one of the castles ghosts who has been caught on camera by the various ghost hunting groups who have visited here.

During recent renovations within the dungeon workers uncovered two female bodies. How they died is unknown, although its thought they were two Nuns.

As for other spooky activity here orbs are frequent throughout the whole building and some being surprisingly bright. Unexplainable and dramatic temperature drops are also common in various areas and the sounds of ghostly footsteps within the hallways and banging from the inside of empty rooms are also common.

Tulloch Castle - Back to top