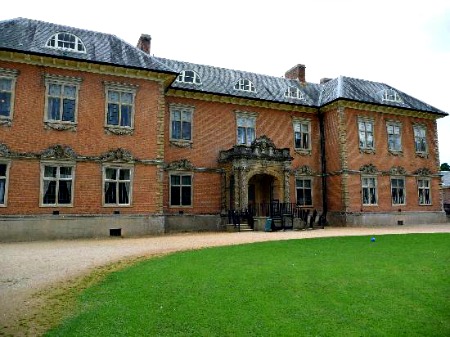 The earliest part of Tredegar house dates back to the late 1400's and the original structure was built of stone and was a very impressive and grand building at the time, grand enough for a visit from Charles I.

The owner of the estate, a man named William Morgan decided to rebuild the entire house on a bigger scale out of red brick which was a rare and expensive building material in Wales at the time. Who the architect of this rebuilding is remains unknown, all-though a man names Inigo Jones is thought to be the most likely designer.

A local historian named Octavius Morgan made a publication in 1882 which provided plans of an intricate garden maze which was in place prior to the 1660s improvements and which probably dated from the time of Queen Elizabeth I.

This is yet another house which makes claim to being one of the UK's most haunted house's, but due to its frequent activity it may just be a contender.

The house has survived through civil war, rebellion and riots and has seen a large number of deaths near its grounds over the years, but the biggest contributor to its ghostly reputation comes from its dealings in with craft.

In 1934 Evan Morgan became in charge of the estate after the death of his father, and his interests started many a story about the house.

Evans was believed to practice witch craft and was even reportedly seen by servants as 'dressing up in peculiar clothes.'

He is thought to be responsible for various rooms in the house experiencing dramatic temperature drops and making people who stand in them over come with a very uneasy feeling. The main rooms in question are the Kings room, the Brown room, which was a special events room and Evan bedroom which see the most sudden changes.

The Duke of Bedford, after attending a party there, noted that Lord Tredegar was a ' very odd man much interested in the supernatural.' He too found himself shivering in that room where Lord Tredegar donned cannibalistic garb, told fortunes and where an Arctic Owl flew freely.

He became well known for his dark practices and is even thought to have attempted a ritual to raise the devil himself. Evans was the last Morgan to live here and then in 1951 it became a Catholic girls boarding school which during this time saw a huge amount of ghostly stories come out of this place.

Apart from there being the stories of a dark presence and witch craft induced evils lurking at this place, other ghostly encounters include the apparition of nuns, bells ringing at odd times and intense emotions overcoming people when they enter certain rooms.

Tredegar House - Back to top