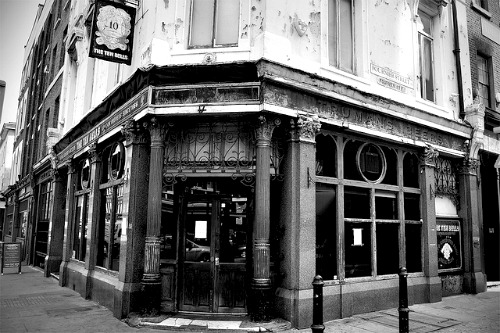 The Ten Bells has existed since the 18th century, although it has had its name changed a few times.

The original building stood just a few meters away and was known as the eight bells alehouse, but this was torn down in 1851 during the cutting of commercial street, but luckily the owners were able to build another pub close by and carry on business.

The name current name of the pub is thought to have been changed in 1788 when the local church got a new set of bells, this time numbering ten, though insurance records from the year 1794 do not show an official recognition to the name change.

The interior of the pub is particularly interesting as it is impressively decorated with original Victorian tiling. Two of the walls feature a blue and white floral pattern tiling scheme and there is a colorful tiled dado going round the room. Of particular note is the mural of painted tiles on the wall on the North side of the building, entitled Spitalfields in ye Olden Time - visiting a Weaver's Shop, which commemorates the weaving heritage of the area. The mural was designed by the firm of W. B. Simpson and Sons and dates from the late 19th century.


Is the Ten Bells haunted?

The Pub is home to a number of ghosts, with different investigation groups coming up with different answers, but its thought to number less than 5. But having only a few ghosts doesn't mean it cant be just as haunted as somewhere with 100 ghosts if they are active enough, and it seems they are.

The pub is so well known for being haunted mostly due to its links with Jack the Ripper. His last known victim, Mary Kelly was seen leaving this place on the 9th of November 1888, only for her brutally mutilated body to be discovered the next morning in Millers Court of Dorset Street on the opposite side of the road from the Ten Bells.

The pub is thought to have certain connections with the Ripper, with the very real possibility that he visited the pub himself on occasion. The fact that a lot of the interior of the pub is still the same as it was in the Ripper days certainly doesn't help the ghostly tales fade away, and neither does the pubs main ghostly resident.

Staff and guests have reported seeing the apparition of a man dressed in Victorian style attire standing in the upstairs room late at night, or walking along the corridors before fading away after a few seconds. A new landlord came into the pub in 2000 and during a clear out of the cellar he found a box containing personal items of a man named George Roberts dating to the early 1900's. Within these items was a wallet which contained a newspaper cutting of the murder of George, turning out he was killed with an axe in Swansea.

It would seem that George has come back to the place he loved after his death and has been lingering around the pub ever since. Also research into official records did in fact show a man named George Roberts had kept the pub in the late 19th century.

There have been a number of Psychics and ghost hunters who have visited the pub, but one interesting occasion involved a psychic who refused to enter one of the upper floor rooms, claiming she could sense something horrible had happened in the room involving the brutal death of baby.

A few years later a lead researcher and expert on Jack the Ripper named Lindsay Siviter visited the pub and was allowed access to the roof. Behind the water tank she found a small sack, and within it were a set of moldy Victorian baby cloths which appeared to have been slashed with a blade. The tank which the bag was found behind sits directly above the room the psychic refused to enter.

Ten Bells - Back to top