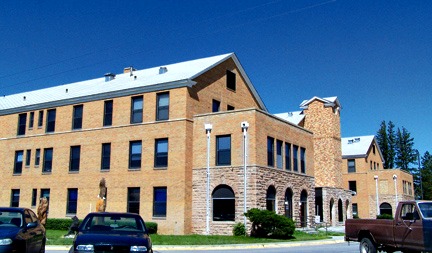 Sioux San hospital was opened in 1898 as a boarding school for Native Americans. The hospital suffered a very bad reputation from the start, as it wasn't very well funded and abuse and neglect were common place. A number of students ran away only to be dragged back there and reports of students committing suicide within the building were common. It was closed down due to the reports of how it operated only a few years after its doors first opened.

The building stood abandoned until 1939, when it was converted into a sanitarium to tackle the outbreak of TB. These years were the darkest the building ever saw. Most of the treatments given to the patients were nothing more than experimental surgeries. There was no known cure at the time and the patients suffered greatly and died in great numbers.

The care and treatment provided was often the cause of most of the misery the patients went through, and suicides were frequent through the years the building was trying to cure TB. Sanatoriums were the most advanced form of treatment during the day, and that treatment was very, very low quality, and often just sped up the demise of those it was trying to treat.

The hospital closed in the late 1960's and stood empty for a number of years until it was renovated into a public hospital and took the name Sioux San hospital. The building is still in operation to this day as a hospital.

During its darkest years in the outbreak of TB, the hospital saw an alarming number of deaths. Treatments included procedures such as surgically collapsing a lung and removing muscle and tissue thought to be hotspots of the disease. Unknown to the doctors and nurses these were of course completely useless attempts to cure the illness as it was a matter of combating the disease with anti-bionics, which they simply didn't have.

The workers of the hospital were responsible for greatly increasing the suffering of the patients, as dying from TB wasn't bad enough, now they had to do it with only 1 lung or under the effects of useless drugs which didn't work.

As for the ghosts which have been seen here they seem to surprisingly all be those of children, particularly the ghosts of the native American students who died within the building while it was a boarding school.

The Boarding school was known for its neglect to the students and they were treated very poorly indeed. Beatings and locking children in rooms on their own were but a small part of the misery the student went through. Running away from somewhere only to be brought back to commit suicide is testament to how bad this place was, and that is known to have happened on several occasions.

As for the actual haunting, orbs are very common through out the hospital and near by grounds, but the most scary encounter to be had here is the sighting of the apparition of a Native American child, or children. They have been seen on a number of occasions walking round the outside of the building for a few seconds before fading away, always looking down at the floor as if to show how unhappy they are.

Sioux San hospital - Back to top