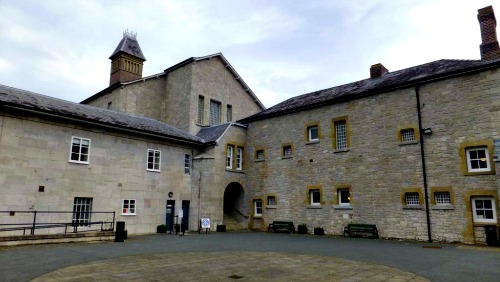 Construction of Ruthin Gaol started in 1775 with only four cells to begin with. It was built on the site of a previous 17th century jail which was demolished to make room for a more modern facility.

The prison gradually expanded over the years, holding 37 prisoners in 1837 and then having a large expansion of a four story wing in 1865.

The Gaol stopped holding prisoners in 1916 when they were transferred to a more secure facility in Shrewsbury. The building itself was purchased in 1926 by the council to use as offices. After this it was used a munitions factory during world war 2 and then sat empty for many years.

In 2004 the building was heavily renovated and turned into a museum. The building is now open to tourists but please check with the Gaol directly to check any seasonal opening times.

Most places which have seen such a large amount of suffering and misery seem to have a ghost story or 2, and this place is no different. Paranormal activity is often reported by the staff and visitors who come here, but who is haunting this place?

One of the Gaols most well known ghosts its that of William Hughes of Denbigh. He was the only person to receive capital punishment at the Gaol and was hanged on the 17th of February, 1903 at the age of 42 for the murder of his wife.

His spirit is thought to linger in the condemned mans cell and although no one has reported seeing his apparition, he has made himself known in other ways. There is a recording in the cell which starts when a visitor enters the room and this recording is set off by a motion detector.

It goes off on a regular basis although no one is seen near the cell. The sensor has been checked and replaced and doesn't seem to be caused by a fault. It is also within the cell that female guests have reported being touched or the feeling as is someone is standing very close and staring at them.

The next spirit is that of one of the jail guards named William Kerr. Its thought that he enjoyed mistreating the inmates and after a number of years they finally had a chance to do away with him. Officially he just disappeared one night on duty, but if this is true its questionable about how the inmates managed to dispose of the body.

Various psychics and ghost hunters have done investigations of the prison and believe they have an explanation for the sounds of a young girls laughter coming from empty areas of the jail. They suggest that she is simply just someone who lived in the area of Ruthin and likes to make herself known around several buildings in the area.

Apart from other spirits the general activity here includes the cell doors slamming in sequence, and people often reporting the feeling as if someone is following them around the whole jail, from the moment they arrive til they walk through the gates.

Ruthin Gaol - Back to top