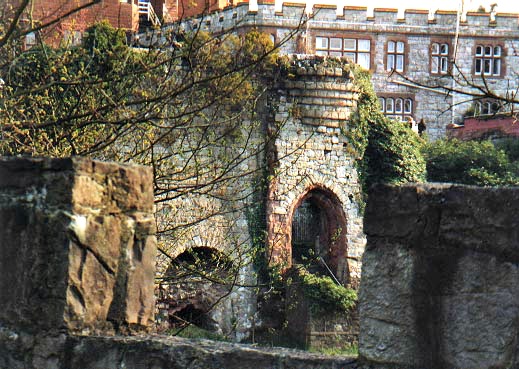 Built upon a red sandstone ridge overlooking the vale of Clwyd, Ruthin castle was once a formidable military structure.

Built in the late 13th century by a man named Dafydd who was the brother of prince Llywelyn II, the castle served for most of its life as a branch home of the noble De Grey family who held the titles of "Barons Grey de Ruthyn".

One of the most notable things which happened to the Grey family is the dealings of the 3rd Baron Grey de Ruthyn, Reginald Grey. When he was in charge of the castle it is thought that he was somehow responsible for sparking the Welsh rebellion against the English, led by Owain Glyndwr.

The castle stood strong until the arrival of Oliver Cromwell's forces during the English civil war. The castle was taken and as Cromwell did with many castle's, he dismantled it to the point where it would be of no military value, a process called slighting.

The castle lay in ruins until 1826 when a modern stone castle building was built in the middle of the ruins and was home to the Cornwallis-West family. It stayed in their hands until 1923 when it was renovated and turned into Britain's first private hospital for the research and treatment of rare internal diseases.

In the 1960's the hospital buildings were turned into a hotel and it has operating as such ever since.

The most well known ghostly inhabitant of the castle is that of Lady Grey who's apparition has been seen walking along the ramparts and through the banquet hall. Her story goes that she found out her husband was having an affair with one of the castle maids.

Her jealously drove her to attack the maid with an axe, leaving a gruesome murder scene. When she was found out she was tried for murder and executed, and it seems she wasn't yet ready to leave the castle.

The chapel is a hotspot for paranormal activity, with sudden intense temperature drops and the ghostly sounds of footsteps coming from empty areas. The chapel is also home to a spirit which has been named the "Grey lady" who's mist like apparition has been seen sitting in silence, staring at the floor before fading away after a few seconds.

Exactly how many ghosts haunt the castle is unknown, with different ghost hunting groups coming up with quite varied answers, but it is though to be at least 5.

The laughter and footsteps of a young girl can be heard in peoples rooms at night along with the playful tugging of bedsheets, and the ghost of a soldier wearing only 1 glove who has been spotted many times all across the castle grounds.

Ruthin Castle - Back to top