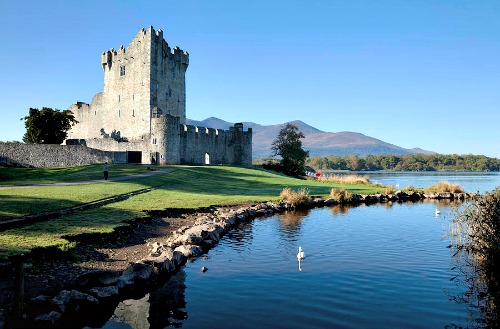 The original structure of Ross castle was constructed in 1536 by the areas ruling clan, the O'Donoghues Mor. The castle has changed hands many times and suffered various hardships.

The castle was one of the last castle in all of Ireland to fall to the invasion of Oliver Cromwell and his roundheads during the Irish confederate wars. This was mainly due to the arrival of Cromwell's artillery and the that he chose to attack the castle by boat. There was a prophecy within the Irish that the castle would not fall until a warship would swim in the lake, and upon seeing the advancing ships the castles defenders were greatly unnerved, submitting soon after.

The castle was passed to the Browne family after the war as they had lived there before hand and could prove that their heir was to young to fight against Cromwell's forces. They were exiled from the castle due to there adherence to James II of England and the castle was turned into a military barracks.

The castle today serves as a bed and breakfast and is located in a beautiful spot, but please check with the venue directly to check availability.

Ross castle certainly has some interesting stories about its ghosts. The most commonly seen and most well known is the spirit of Sabina, the daughter of an English lord who lived in the castle. Her father was known as the "black baron" and was notoriously cruel to his people and widely hated.

Sabina on the other hand was pleasant and beautiful woman, well liked by the local towns people even though they hated her father. Normally whenever Sabina left the confines of the castle her father would order an escort to go with her, but growing weary of having someone babysit her all the time she often would slip out of the castle undetected to spend time in the villages alone.

It was on one of these occasions that Sabina met a handsome young man named Orwin, an Irish local who was the son of the chieftain of the O’Reilly clan, a rival family who had been to war with the black baron many times.

As the two spent more time together they fell deeply in love, while at the same time realizing that they could never be together due to their families rivalries. So they planned to elope one night and meeting by the shore next to the lake, they boarded the boat. The night was stormy and mid crossing their small row boat capsized and Orwin drowned.

A guard from the castle saw the pair leave and notified the Baron who dispatched troop to get them back straight away, which was just in time as Sabina was rescued alive and well from the lake. She was so distraught from the loss of her lover that she locked herself in her room and refused to eat or drink and then a few days later she fell asleep, never to wake again.

Her spirit lingers in the castle walking through the corridors and along the ramparts, ever searching for her lost love. There is also a story about her being trapped her from a curse which was placed on her father as punishment for his mistreatment of the Irish people, the curse was to make Sabina trapped her instead of him so he could see the only thing in the world he showed emotion for suffering.

There is also another more hostile presence here, which is thought to be that of Myles "The Slasher" O'Reilly who was an Irish folk hero who spent his last night at the castle before being killed in battle in the year 1644.

Other paranormal presences here are thought to include that of the Black Baron himself along with many other unexplainable activity, such as the knocking on windows from the outside when people are trying to sleep, even on the upper floors and sudden, intense temperature drops.

Ross Castle - Back to top