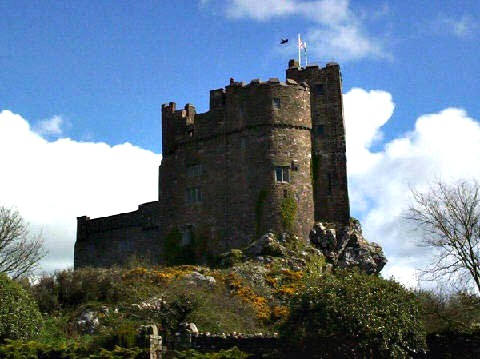 Roch castle was built on the site of an earlier wooden fort by a Norman knight named Adam de Rupe in the late 12th century.

The castle stood as a defensive structure to separate the English and Welsh areas of Pembrokeshire, and remained strong until the year of 1644. Parliamentary forces attacked the castle for a second time in this year and were successful in taking it, burning much of it down.

After this the castle stood empty until being occupied by the Duke of Monmouth who used it during his rebellion, though he did nothing to attempt to restore the castle.

It remained abandoned until 1900, when it was bought by a politician named John Philipps, who carried out subtantion restoration on the castle, making it his primary residence.

In 2008 the castle was purchased by a private company who has turned the castle into a vacation home and corporate retreat.

The most well known ghost at the castle is thought to be the spirit of Lucy Walters. She was the daughter of the head of the Walters family who supported the Royalist forces. She was known to be sympathetic to the parliamentarians and later went on to have a son with King Charles 1st who turned out to be the 1st Duke of Monmouth.

The duke led a rebellion against the parliamentary forces and was subsequently captured and beheaded on tower hill in London.

People who have visited the castle have claimed to see the apparition of a ghostly white see-through woman who floats along the halls and castle walls, passing straight through closed doors.

The other story of this place is likely the product of fiction. The story goes that the castles first occupant and builder, Adam de Rupe built the castle were he did because a witch he met foretold he would be killed by a poisonous snake unless he could avoid being bitten for 1 year. He built the castle where he did to hide there from any serpents for 1 year.

During the winter months in the final days of his hiding he ordered some fire wood to be brought to his chamber. As he was stoking the fire a snake who was hiding inside a log lunged out and bit Adam, killing him within hours.

It is this story which is the explanation for some of the castles paranormal activity, with the ghost of Adam haunting the corridors and halls. But the original story suggests he moved into the castle the very same year he was told about his fate, and i can assure you nobody built a castle that size in a few months. Also since records are very sketchy in those years, there's no way of knowing if Adam was prophesied any type of fate, as well as the castle sitting on a previous defensive structure which would explain its location.

Roch castle - Back to top