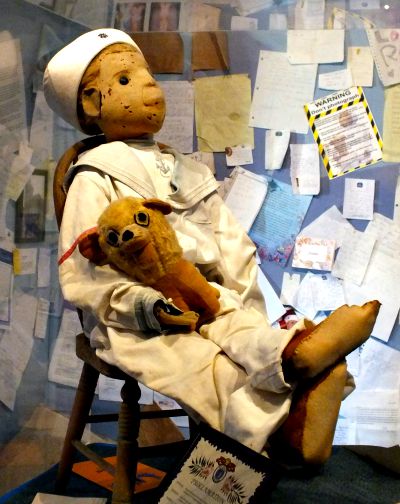 The Story of Robert the Doll

Robert the doll is an innocent looking enough old toy doll that was once owned by author Robert Eugene Otto and served as the inspiration for the character "Chucky" in the various horror films he's been in.


The story starts in the late 1800's when Thomas Otto and his family moved to the area of key west in Florida. He was quite a wealthy person and was also known for being a little to harsh with his servants, which is believed to have started the whole thing.


One such servant to the Otto family was a Haitian woman who was hired to look after the Thomas Otto's son, Robert. However one day she was apparently seen in the garden practicing black magic, which caused Mrs. Otto to fire her on the spot.


Before she left the house she gave Robert a doll, which stood 3 feet tall which had button eyes and had human hair. The doll was well liked by Robert and he was known to take it everywhere, even dressing it in his own clothes.


After being told off by his mother, Robert decided to go by his middle name Gene, telling his mother that Robert was the dolls name. This relationship with the doll started to go beyond a normal "imaginary" friend relationship that children have, with Gene spending all his free time playing with Robert, even being heard talking to him for hours in his room. The strange thing about these conversations is that when his mother would listen in on the other side of the door she would often here Robert replying to Gene in a much lower voice, but often just passed it off as Gene replying to himself in the voice he imagined Robert to have.


Not long after there conversations started Genes toys would often be found torn up, and objects in his room were found as if they had been thrown at the wall with some force, but whenever questioned he would always say "Robert did it".


This went on for some time and caused some of the house keepers to become so scared they would often leave the job within weeks of starting. His family decided enough was enough and took Robert and put him in a box and placed it in the attic, where it remained for some years.

After Genes father died he was left the family home in the will, but decided to live there with his wife. He found the doll in the attic and started to carry it around again just as he did as a child, much to his wife's displeasure. Apparently his wife went insane and died of unknown reasons, with Gene following her to his own death shortly after she died.


Robert was left in the turret room of the house and stayed there until a new family moved in. They moved the doll to the attic again but it seems it didn't want to stay they. The family would often find the doll somewhere in the house and one time the owners found the doll at the foot of their bed with a kitchen knife in his hand, which was enough to make them quickly move out.


The doll was moved to East Marrtello Museum in Key West and has been sitting in a glass box ever since. But being in a new place didn't seem to stop the doll from scaring people. Workers at the museum would often report finding him in a different position to what he was left in, and some have claimed to have seen him move, and his default smile turn into a frown right in front of them.


There's a story about how you must ask the doll itself for permission to take its photo, with it tilting its head slightly if he approves, though if he does not and you take the picture anyway, or if u make fun of him a curse will befall you and anyone who is there with you at the time.


Today Robert the Doll is still in his glass box in the museum in his sailor suit and holding his toy lion, continuing his evil ways.