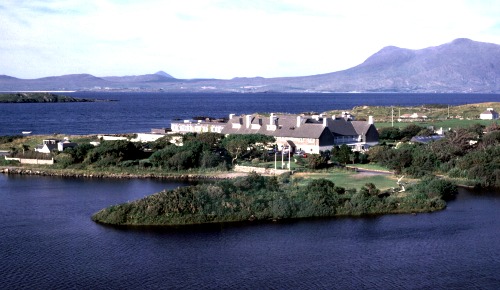 Renvyle house has an unpleasant enough history to rival any other haunted house in Ireland. The original structure was built in 1883 by the Blake family as a country house and it served as such until the 1920's when it was destroyed by the IRA.

The area of the hotel has certainly seen more trouble than 2 destroyed hotels. Apart from going through a civil war and famine the area has seen trouble long before the first hotel was built.

Donall O'Flaherty, an Irish pirate queen married the heir to the most powerful Gaelic clan in Connaught. This marriage ended in Donall's murder and the family moved from Renvyle castle to the area which is now the site of the hotel, establishing the first buildings here.

The hotel has seen many famous names stay within its walls and is today operating as a very fine hotel in a beautiful location.

The hotel doesn't have the most ghosts, but is certainly seems to have some of the most terrifying.

One of the most famous ghosts at the hotel is thought to be that of W.B. Yeats, the famous poet, who stayed at the hotel many times. People have reported seeing his apparition roaming the corridors and the sounds of footsteps coming from empty areas. It was also claimed by the owner at the time that when Yeats and his wife came to visit the paranormal activity dramatically increased.

He may be the most well known ghost at the hotel but also probably the least scariest one. He actually experienced paranormal activity when he visited the hotel, getting so used to it that one day when he was in the Oak paneled library with guests, the heavy oak door suddenly swung open and he is known to have raised his hand and said "Leave it alone, it will go away, as it came".

He also conducted a séance in the room in an attempt to identify the spirit. Using automatic writing as his method of contact, he ended up with the message that the spirit would show itself to his wife. She happened to be a well known psychic and one day in the same room she saw a young boy formed of mist who appeared to be around the age of 14. Other psychic who have visited the hotel have also picked up the presence of a young boy and have agreed he was a member of the Blake family, the original owners of the house.

Renvyle house has also seen an exorcism attempt when Evan Morgan who later became Lord Tredgar attempted to rid the building of spirits, only to claim to be thrown to the ground by an unseen force during his attempt.

There are many other stories of the spooky goings on here, with many areas of the hotel being hot spots for activity. Guests have also reported their fair share of encounter, with people making claims of having footsteps inside their room when the lights are off and they are trying to sleep. The tugging of peoples bedsheets is another common occurrence here, to the point were it actually wakes people up only for them to gaze into an empty dark room.

Renvyle House - Back to top