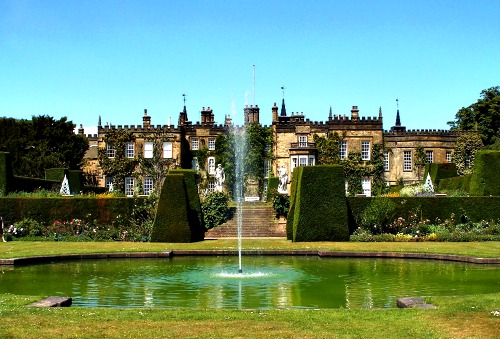 Renishaw Hall is a grade 1 listed building which was built in 1625 by George Sitwell who later went on to become the High Sheriff of Derbyshire in 1653. He obtained his fortune from successful iron master and colliery owner business's and his family operated such business's from the 17th to the 20th centuries.

The building had substantial additions made to it including the building of the east and west ranges which were built by Joseph Badger of Sheffield between 1793 and 1808.

The house passed down through the Sitwell family until 2009 when Sir Sacheyerell Sitwell bequeathed it to his daughter Alexandra Hayward, separating it from a long line of baronetcy for the first time in the family's history.

The hall is open to the public on occasion and host events such as craft fair's, but please check with the venue directly to ensure the correct seasonal opening times.

Renishaw hall has a story behind it which is a little different from the other haunted mansions you might find. During work on the hall a coffin was uncovered between the joists in the floor under one of the bedrooms. The discovery of the coffin was during the early 1800's and the odd thing about it was it appeared to have once contained a body, with signs such as traces of clothing and hair but no actual body inside.

The coffin appeared to have been made during the 17th century and was firmly fastened to the beams with iron clamps, but oddly due to the depth of the joists, the coffin did not have a lid on, with the floor boards serving such a purpose.

Since there was no official documentation for the death and burial at the hall the presence of the coffin created many questions. Mainly why was it there and why was it so firmly fastened in place?. It seems if someone were to go through the trouble of digging out a hole and fastening iron clamps in place, why would they have placed it somewhere without enough room for a lid? or even in a much more well hidden location?, Oh, and of course were the hell is the body?

What happened for the coffin to be put there will never be known, but it seems to be the reason for the halls haunting. The most well known of which is the presence of a female ghost in the bedroom the coffin was found under.

People staying in this room have claimed to have been awoken by the feeling of cold lips kissing their cheek, sometimes more than once during the night. The sounds of crying have also been heard from the other side of the door when the room was known to be empty, and sudden unexplainable temperature drops seem to be common place in this room.

The next most well known story is the sighting of the figure of a servant girl. She has been described as having grey hair under a white cap, with a blue dress and dark shirt. She has been seen in one of the corridors walking towards an old staircase which was removed many years ago, only to disappear when arriving at its base. It seems whoever she is, she had been there for some time as there is a letter from one of the Sitwells describing the sighting of the spirit.

I saw the figure with such distinctness that I had no doubt at all that I was looking at a real person, while, at the same time, although seated in a well-lighted room and chatting with friends, I was conscious of an uneasy, creepy feeling. I tried to see the features, but could not. Even before I called out, my friends noticed that I appeared to be following something with my eyes. The light in the passage was good and I could see so well that I could distinguish the exact shade of the dress. The figure was that of a woman between fifty and sixty years of age and her grey hair was done up into a “bun,” under an old-fashioned cap. I have never seen a ghost, nor had I been thinking about ghosts.

Renishaw Hall - Back to top