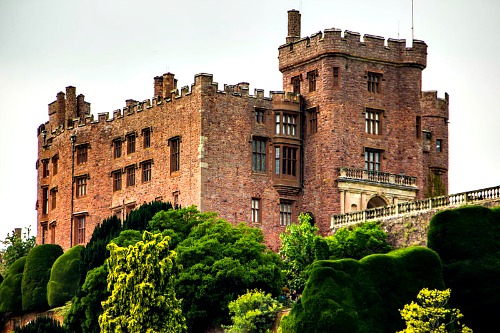 Powis castle stands out a little in its history since its the only castle in the area to be built by the welsh as a ruling seat for welsh princes, unlike the other surrounding castles such as Caernarfon, conwy and harlech castle which were built by the English to suppress the Welsh. Originally built close to the year 1200, the castle has been heavily altered over its lifetime, with different owners creating various additions to the structure and surrounding grounds.

During the year 1286, four years after Edward I's conquest of Wales, the last hereditary prince of Powis renounced his royal title and was granted a new title of Baron de la Pole, thus ending Welsh royal occupancy of the county as a separate kingdom.

The last private owner of the castle was George Charles Herbert, 4th Earl of Powis, who's wife made substantial changes to the castle grounds, creating the foundation of the beautiful gardens which can be seen today. She unfortunately died in a car crash in the year 1929 and Lord Powis lost his two sons in the first and second world war. With no direct family to continue ownership of the castle he left it to the National trust upon his death in 1952.

The castle is now open as a tourist attraction to the public but please check with the venue directly to check any seasonal opening times. Also please not that due to the deer park dogs are not allowed on the grounds.

There isn't a single castle in Wales which doesn't have a ghost story or two. Castles are always home to a few tales due to their appearance and age and the the fact that many people would have died within their grounds over the years. Powis is no different and holds a few of its own tales, though some of the stories associated with it are undoubtedly the product of camp fire stories.

The castle is said to have only a few ghosts with only certain areas of the building being haunted. The dukes room and the ballroom wing are thought to be the hot spots for paranormal activity, with activity in the grounds close to the outer walls also being a place for otherworldly activity.

The dukes room is said to be haunted by the spirit of a woman who's identity remains unknown, though thought to be the daughter of one of the past earls of Powis castle. Her apparition has been seen dressed in a long black dress and sitting in a chair close to the fireplace, staring into the flames. People have also claimed to have been touched by unseen hands in this room, with hair being gently stroked being the most common claim.

As for the ballroom wing the spirit who manifests here never seems to show itself in the form of a person, but instead making itself known by the sounds of piano music coming from the area when no one is present to make it. Also claims of poltergeist activity have been noted here, with people making claims of seeing chairs and books move across the room or fly onto the floor inexplicably.

Banging on doors and windows from the outside is also another claim which has come up more than once, as is the sighting of the apparition of a child dressed in green who lingers within the Clive museum.

Powis Castle - Back to top