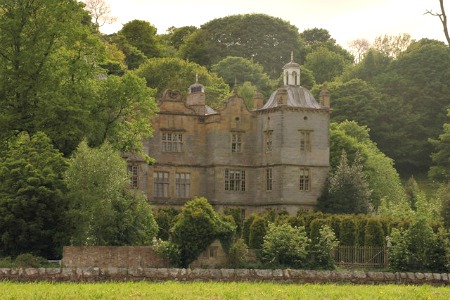 Plas Teg is a Jacobean style house built in 1610 in the quaint little village of Pontblyddyn by by a Welsh politician named Sir John Trevor I.

The Trevor family lived in the house until the outbreak of the English civil war when they moved to another of their properties and rented out the house. They returned in 1930 until it was sold to the war office after the outbreak of world war 2 where it was used as a housing unit for the troops. During this time and up until 1950 the house saw some very heavy use with its renovation being a last priority during times of war.

The house was so badly run down that it was decided the best cause of action would be to demolish it, but this was stopped due to an outcry from the locals.

Cornelia Bay bought to house in 1986 and began a huge restoration project, and just 10 months after buying the house it was opened up to the public and remains so today.

on the A541, Wrexham/Mold Road

This stunning old building is widely known as one of the most haunted places in Wales and has an unusual trend in its paranormal happenings.

Many places of this age and appearance often acquire various ghost stories and versions of what really happened. Some of these include the house being used as a court during the 1700's where people where tried and actually hung on its grounds, and tales of the building operating as a sanatorium during the outbreak of TB.

There are no records of these 2 things being true, though it is not impossible, but this place didn't get the reputation of being one of the countries most haunted houses on camp fire stories. The house has seen an alarming number of reports of people being touched by the spirits here.

People have claimed everything from being brushed past and poked, to actually being pushed hands being placed on both shoulders from behind, always by an unseen presence.

Who or what is haunting the house seems to forever remain unknown. There is a popular story about the daughter of the first owner being murdered near by and haunting the place, but this is untrue as both daughters outlived their father and went on to marry and die of natural causes.

There is only one possible story of who one of the spirits could be here, and that is the story of Elizabeth Trevor-Roper who died aged 16 at Plas Teg in 1815. The story goes that 2 men loved her and she only returned the love of one, the other man out of jealousy killed her lover and then came for her. In the following struggle she was either fell or pushed down the well were she drowned. Her apparition has been seen around the well area and a gardener even once reported being grabbed by unseen hands who tried to pull him into the well when he was working near it.

The only other common occurrence's of paranormal activity here is that of voices and emotional waves. Everything from laughing and muffled giggling has been heard coming from empty rooms, as well as actual EVP's being recorded and a loud, wailing noise, almost a scream is heard from one of the bedrooms when no one is in the room.

Since the latest owner reopened it to the public you are welcome to view the amazing property and heard some of the ghost stories first hand. Please contact the house to check opening times before arranging a visit.

Plas Teg - Back to top