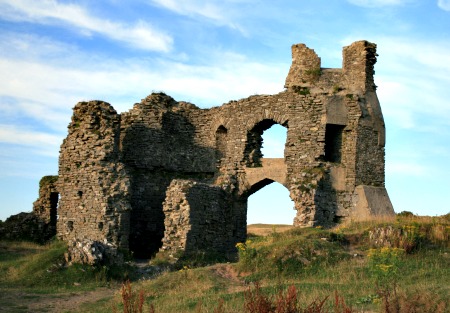 History on Pennard castle is little sketchy, with the general booking keeping at the times and the turmoil of the era, it seems that key parts of the castles history will forever be lost. The first version of the castle was constructed sometime during the 12th century and consisted of wooden fortifications. The project was likely commissioned by Henry de Beaumont after being granter the title of Lordship of Gower.

Around the start of the 14th century the castle was rebuilt from local limestone and a reddish sandstone, most likely under the orders of De Braoses who owned the castle for the latter part of the 13th century.

The castle was just a small defensive fortification as opposed to a high lords home, built were it was to overlook the surrounding valleys. Consisting of a curtain wall with a twin towered gate house, the courtyard they surrounded only contained 3 small towers, and there is evidence of the castle being poorly constructed with many faults, such as arrow slits in nearly useless positions.

The castle had more than its share of troubles and that's without it ever being attacked. The nearby sand dunes blasted the soft rock walls and caused uncomfortable living conditions and expensive maintenance. It was eventually abandoned for good by the year 1400, with no one else ever moving in due to its deteriorating condition and design flaws.

Today the castle is open to the public as a tourist attraction though there is little left to see. All that remains today is parts of the main tower, some of the Norman stone hall and parts of the gatehouse and curtain wall.

The stories of the ghostly activity that goes on at Pennard castle seems to be based entirely in legend. The main one associated with the castle is the tale of a faerie's curse.

The legend goes that the chieftain of the castle at the time went to fight for one of the Welsh princes. Upon proving himself a to be a great asset to the prince, he was rewarded with a prize of his choosing, of which he chose the princes daughter.

Upon returning to the castle a great feast was held to celebrate their victory. But during the feast a number of glowing lights appeared on the grounds outside the castle. Thinking they were torch's from a force about to attack the castle, the chieftain gathered his men and ran yelling towards the lights with swords flailing.

However upon reaching them they turned out to be a group of faery folk who, angry at being disturbed so rudely cursed the castle to sand, which was believed to be the reason the castle is so decayed from sand blasts. An odd twist to this legend is that there is an Irish folk story which claims how a huge amount of the sand disappeared from a beach on the south of Ireland.

The second tale and the most well known ghost is thought to be the spirit of a woman who drowned herself in a nearby lake. She's thought to be the most probable candidate for the presence of a Gwrach y rhibyn which is the Welsh equivalent of a Banshee. There is a saying that anyone who spend a night in the castle will never again see dawn.

Pennard Castle - Back to top