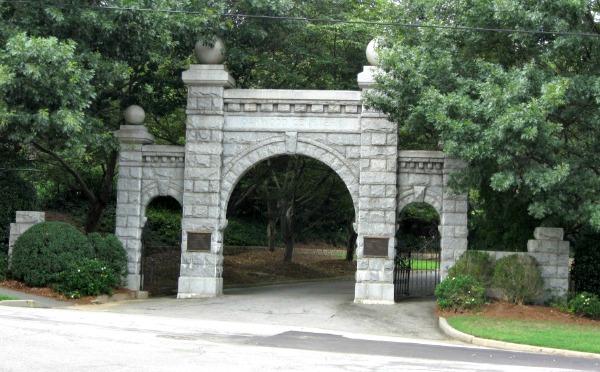 Oakwood cemetery was founded in 1869 on land left by a man named Henry Mordecai, 2 years earlier. It was only originally 2 and a half acres in size and housed an area for the burial of confederate soldiers and another for Hebrew burials.

The cemetery has expanded to its current day size of 102 acres and has graves for notable characters from the American civil war, as well as politicians and governors alike.

The cemetery holds various monuments to remember those lost during the war, as well as holding various tours and informative programs to educate its visitors about  the cemeterys part in history.

Since it is, and always has been a cemetery, it hasnt seen any violence and doesnt really have a "typical" past you would expect with a haunted location, but the sheer amount of people buried here may have something to do with its ghostly reputation.

Is The Historic Oakwood Cemetery Haunted?

Burial grounds of any kind have always been associated with ghosts, and oakwood cemetery is no exception.

As you may have guessed most of the spirits people claim to have witnesed here are that of civil war characters, from both confederate and union sides, which is odd due to it originally being a confederate burial place.

As for what you can actually expect when hunting for ghosts here, most of the stories seem to decribe the more subtle side of hauntings, the most common of which is the failure of electronics. Cameras and cell phones have been drained of their charges when carried round the grounds, only to return the their normal levels when leaving. This seems to be especiall common in the area towards the rear of the grounds where the poorer people were buried.

Also claims of the sounds of childrens laughter coming from around the various tombs in the cemetery have been reported a number of times, though no one has claimed to have actaully seem any children playing.

There are a few claims of one particular ghost who seems to like to make himself known. A young boy, described as being around 10 years of age is said to have approached people with a ball in his hands asking them to play. He is said to appear as a normal person with no signs of him being of an other-worldly nature, though he is never accompanied by any adults.

Whether or not the person he approached accepts his request doesnt seem to matter, as he is said to vanish in an instant whenever whom he approached loses sight of him, even as fast as blinking. Who he is or why he is there is something which no one will ever be able to answer, but his story comes up time and time again and doesnt seem to be stopping any time soon.