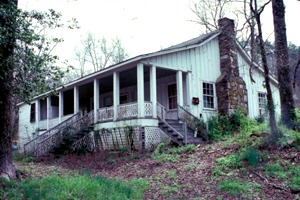 Mayberry lodge is situated 20 miles west of Hot Springs and was built by and named after David Mayberry. When the lodge was first built exactly seems to be a mystery, but David inherited the land from his father and built the lodge in the mid 1800's.

The area saw a huge mining boom after the civil war and a need for somewhere for travelers to stay was filled with the construction of the lodge, which saw great wealth come to the Mayberry family.

David Mayberry died in 1881 and the lodge was shut down as a business and fell into disrepair until it was burnt to the ground in the last couple of years.

There are many tales of the ghosts of Mayberry Inn. Since the area saw a huge amount of travelers and traders pass through the area, it also saw more than its fair share of gun fights and robberies gone wrong.

It is one of these gun fights that is thought to have sparked the breakdown of David Mayberry. During one particular gun fight Mr Mayberry was hit by a bullet, though it did not kill him it is thought that this was the reason he later became schizophrenic.

One evening David Mayberry murdered his wife and burned her body in the fire place, shortly afterwards he went to his infant son and drowned him in the bathtub.

There was a common tale about words appearing above the fire place at around midnight, and the sounds of a baby crying coming from the bathroom.

Also one of the caretakers that lived in the caretakers cabin reported the sounds of fiddle music and quiet laughter coming from the abandoned building, only to disappear when he approached.

There are many other tales from this building, such as a man who was murdered in one of the upstairs rooms and it is said that his blood stain would not wash out of the floorboards to the point that they had to paint the floor brown to hide it.

There are tales of a headless man who has been seen walking around the outside of the lodge and also the sounds of muffled screams and quiet gunshots in the area when no one is there to make them.

Mayberry lodge - Back to top