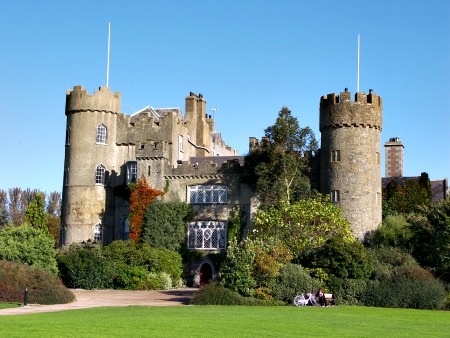 The beginnings of Malahide castle go back to 1185 when the lands and harbor of Malahide was given to a knight named Richard Talbot. He built the first castle for him and his family and the Talbot's lived at the estate for 791 years between 1185 and 1976.

The only time the Talbot weren't in charge was a period of 11 years when Oliver Cromwell gave it to one of his men named Miles Corbet during his conquest of Ireland. When Cromwell was defeated Miles Corbet was hanged and the castle was once again in the hands of the Talbot family.

The estate saw many additions and alterations to it during the years, with the castle being largely expanded including the addition of the towers in 1765, during the reign of Edward IV.

One interesting but disastrous loss for the family was during the battle of the Boyne. Fourteen members of the family sat together in the Great hall and every single one of them was dead by the evening.

In 1975, Rose Talbot who was the last surviving member of the family to carry the surname, sold the castle to the Irish state and later died in 2009 in Tasmania. The remaining members of the family married into a German name and so the Talbot line at the castle has forever ended after over 800 years.

Considered to be one of Dublin's most haunted buildings, the castle is thought to be home to five ghosts.

The first ghost, and by far the most scary is that of Miles Corbett. He was the Roundhead who fought in Cromwell's army during the conquest of Ireland and was awarded the Talbot's castle for his service. After Cromwell was defeated Corbett was hung, drawn and quartered for his crimes against the Irish during his time fighting for the invasion.

The scary thing about this ghost is that people have claimed to have seen his apparition wearing a full suit of armor, but the worst part is when he gets close enough it is claimed he falls into four separate piece right in front of them.

The next one is thought to be that of Lady Maud Plunkett, who has been seen running through the corridors of the castle as if chasing someone. Visitors to the castle have claimed to have been chased by her.

The next one is responsible for the terrifying pain filled moans that echo through the corridors. It is said he can be seen only after dark, clutching a spear wound on his side. The reason he lingers here is thought to be because of his wife who's honor he died defending, only for her to marry his rival straight after his death.

Ever castle or mansion old enough seems to have some kind of "lady" ghost and this place is no different. A spirit known as the "white lady" haunts the walls. Within the great hall there hung a portrait for many years of a beautiful young lady in a flowing white dress, though no one seems to known anything about her identity. People have claimed to have seen this woman walking around all areas of the castle in her long flowing dress. The odd thing about this ghost is that people have claimed to have seen her over a period of many years.

The last ghost at Malahide castle is known as "Puck" and is though to be that of a 16th century jester. He has been captured in a number of photos but hasn't been reported since the sale of the contents of the castle in 1976.

The story goes that he fell in love with the wrong woman and in some sort of revenge attack he was murdered, vowing to haunt the castle after his death.

Malahide Castle - Back to top