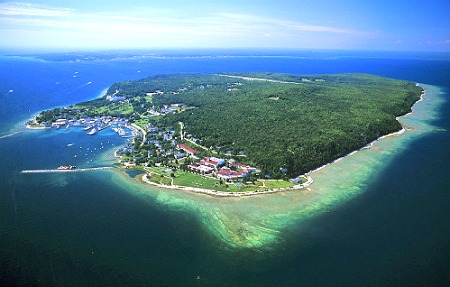 Today Mackinac island is a pleasant resort area offering relaxed living and leisurely boat rides, however the islands past hasn't always been so bright.


The first recorded piece of history about the island is during the 17th century when a French explorer named Jean Nicolet found the island during his explorations during 1634. At this point the island was inhabited by a native American tribe which is anyone's guess as to how long they had been there.


The island became an important stop on the fur trade which ran through the area and a French trading post was established to become the primary trading post for the straits of Mackinac.


Since it was such a key location for the straits it became of great interest to the British during the war of 1812, and they captured the island along with the small "Fort Mackinac" which had been built by the Americans. The British built a second fort called "Fort George" on the high ground behind the existing fort Mackinac.


During 1814 the island saw its second battle when the American forces tried to recapture the island, though the British held out and the island remained in their hands. A year later the signing of the Treaty of Ghent forced the British to return the island and surrounding lands the the United States, and fort George was renamed to fort Holmes after an American commander who died in the fighting.


Today the island is a resort featuring many holiday homes and leisure activities, and also interestingly enough a complete ban on any kind of motor vehicle, with exceptions being made for construction and emergency vehicles.

Normally with a haunted location its easy to tie the spirits to a particular building or area, however the thing about Mackinac island is that the whole place is haunted, all 3.8 square miles of it, with ghosts being reported in every area, numbering in what seems to be over 100 different spirits.


As you may have guessed the source of most of these spirits is thought to be from the battles which took place here, since there hasn't been any other conflicts or major disasters which have happened here.


The areas were the 2 forts stood seem to have the most frequent sightings, with people reporting the apparitions of soldiers dressed in 19th century uniform, as well as the spirits of Native Indians.


The Mission point resort also seems to be a hotspot of the island, with a popular story coming from the 1970's after the building was donated to the Mackinac college in 1966. It tells of how one of the students there fell in love someone who would not return his affections, and in his dismay he hanged himself within the college and visitors to the building have reported his presence. He has been known to bump past male visitors and touch the hair of females visitors to the building.


As for other ghosts there are simply to many stories to tell. People have claimed to have seen anything from full bodied apparitions to orbs and strange mists. There is a company on the island which offers frequent ghost tours during the holiday season, you can find the by clicking ﻿HERE﻿.