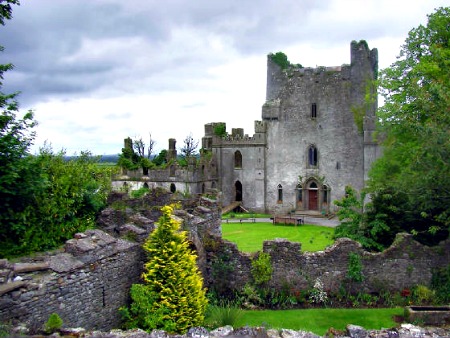 The history of the site of Leap castle stretches back to 500BC during the iron age as artifacts have been found here, and with the possibility that the area was occupied before that going back into Neolithic times.

The castle was built upon an old stone structure thought to have been ceremonial in nature by the O'Bannon clan who were the second most powerful clan in the area after the O'Carroll clan. The exact date of which the castle was built is unknown, as many records were either lost or destroyed or just simply not kept in the first place, but its thought it was built around the year 1250.

In 1513 the Earl of Kildare attempted to seize the castle but was unsuccessful, only to attack again three years later and seizing the castle, partially destroying it.

After being thrown out in 1557, the O'Carroll clan took the castle and held it until 1659 when it was passed to the Darby family by marriage. During this time the O'Carroll's experienced many troubles within their clan, including a vicious power struggle which saw one brother walk into the chapel and murder his other brother who was a priest, right in front of many of the family members.

In 1974 the castle was bought by Australian historian Peter Bartlett. Bartlett, together with a builder named Joe Sullivan, began extensive restoration work on the castle up to the time of his death in 1989.

Since 1991, the castle has been privately owned by musician Seán Ryan, who is undertaking restoration work.

This is another place which claims to be the most haunted castle in Ireland, which is a bold claim to make if you don't have the paranormal activity to back it up, which it seems this place does.

The castle is so well known for its hauntings that there have been various ghost hunting TV shows  recorded here, with visits from Livings TV's "Most Haunted", America's "Taps" team and ABC Family's "Scariest places in earth".

The amount of media attention this castle has seen has certainly been responsible for new ghost stories and increased claims of sightings, but the castle does seem to still hold its own on the basis of its actual hauntings.

The number of ghosts at the castle is unknown, as various groups who investigate seem to come up with widely varied results, but it certainly seems to be no less that 10.

One of the most well known ghosts at Leap castle is that of the O'Carroll priest who was murdered by his brother in front of his family within the chapel, which has come to be known as the "Bloody chapel". There are many claims of seeing a man in a hooded priests robe standing within the chapel walls. He is also thought to be responsible for the sudden temperature drops and feelings of panic people claim to be overcome with when in the chapel.

The castle is also thought to be home to an evil presence, described by psychics and investigators as being that of an non-human being. Refereed to locally as "it" and being the reason that many of the locals wont venture near the castle after dark, its thought to be responsible for many of the paranormal activity at the castle.

The being has also been named as an "Elemental" though what this is actually defined as in this case is unclear. Whatever the being is it sure does like to scare people. Slamming doors and creating footsteps following after people through the hallways, it has been responsible for many a visitor to run from the castle.

Another hotspot within the chapel area is the ubliet, another name for a dungeon. It is located through a small drop door and has seen much suffering and pain. During the early 1900's some workmen were hired to clean out the ubliet and upon entering found several human skeletons laid out in a pile atop one another.

Leap Castle - Back to top