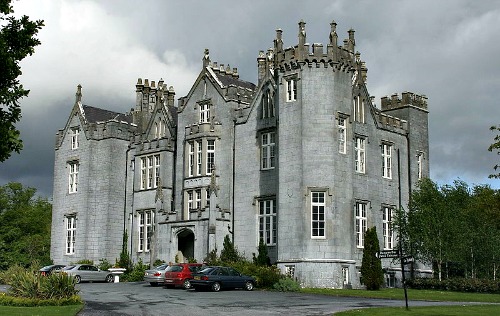 The date the original structure of where Kinnitty castle now stands is unknown, but it was thought to be around the early 11th century. The original structure did not last and was destroyed in 1209, only to be rebuilt by the Normans in 1213. During the year of the building abbey was built near by of which the high cross and abbey wall still remain.

The castle has changed hands many times in its life, with the first being the replacing of Normans with the O'Carroll's, who were one of the most powerful clans in Ireland at the time. During the year 1630, William O'Carroll built a new castle close to the abbey, though this was confiscated only 11 years later as part of the kings county.

The castle changed hands a number of times again until in 1811, when Lady Catherine Hutchinson hired architect James Pain to expand the castle in the Gothic style to its former size.

The castle changed hands again after its expansion until being burned by the IRA, though luckily was was restored yet again in 1928. In 1951 the estate which includes the castle came under the ownership of the Irish state until being sold into private hands in 1994, when it was heavily renovated and turned into a hotel and events venue.

The castle is currently functioning as a hotel and has also made an appearance on Living TV's "Most Haunted" in the 5th season.

What often happens to buildings built on ancient Indian burial ground's is known across the world, but what happens on ancient Irish druid sites is less well known, but more than a rival for its counterpart.

There is a cottage on the castle grounds were the owner lives, and just outside his cottage is an ancient druid stone circle, built many years before the cottage or castle were even thought of. Orbs have been seen in great numbers in this area, showing up regularly in photos in all conditions.

Kinnitty castle's most well known haunting has come to be known as "The Phantom Monk of Kinnitty" and he can be found in the banquet hall. Many guests and staff alike have claimed to have seen his presence, with descriptions of him being always in a black robe and being very tall, with a dark shadowy face revealing no facial features.

He is thought to be a very friendly spirit, with him being known to make an appearance to guests during the more joyous events at the castle.

Another story that keeps popping up from the castle is the haunting of the Geraldine bedroom which is thought to e home to the spirit of a child. People who have spent the night in this room have claimed to have heard breathing coming from the corners of the room and the sound of tiny footsteps running from one side to the other.

There's quite an interesting tale of another ghost with a special power who haunts the great hall. Apparently he has been known to whisper to the staff of the hotel telling them of his predictions. The odd thing about this is that these prediction always seem to come true, though this is obviously very hard to verify. The ghost itself though has been seen by many visitors to the castle, with the dungeon bar being another of his favorite spots to linger.

Kinnitty Castle - Back to top