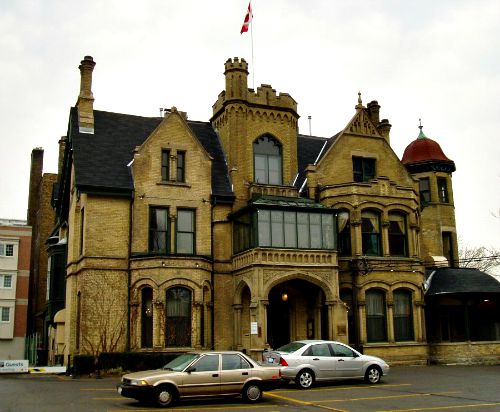 The keg mansion is just the name given to a restaurant that is part of "the keg" brand. It has been owned by the keg company since 1976 and has been open as a steakhouse ever since.


The actual house itself was built in 1868 by Arthur McMaster. At the time of construction, Jarvis street was one of the wealthiest areas in all of Toronto. Boasting 26 rooms and set back off the road to accommodate its large garden, the house was one of the finest on the street.


In 1882 it was purchased by the Massey family, who added the turret, verandah and greenhouse, as well as making significant interior renovations, but the general gothic appearance was left largely untouched.


After the Massey's left the area the house went into the owner ship of Toronto university. After this it served as home to Torontos first CRFB radio station, then onto becoming an art gallery until 1960.

Is the Keg Mansion Haunted?

There are several known ghosts that haunt the Keg mansion. The first and probably the scariest is that of a past maid. She was the personal assistant for Lillian Massey, the only daughter of the family and the most loved, but Lillian died in 1915 and soon after the maid took her own life.


There are various suspected reasons behind this, with the first being that the two were so close that the maid could not live without her friend. The other reason is that the maid was having an affair with a member of the Massey family, which was strictly forbidden, and after Lillian's death she thought she would be found out and instead took her life before that could happen.


As for her ghost it has only been seen in one place, at the top of the main staircase where she hung herself. A number of people have reported seeing her apparition hanging from the beam at the top of the stairs, only to fade away after a few seconds.


The next most well known ghost, or possibly ghosts here is that of the spirits of children. On the second floor where the children's bedrooms where when the Massey family owned the building, the sounds of children playing and laughing have been heard, but the area is always empty upon inspection. There are even a few claims of how the apparition of a small boy has been seen peering down over the balcony at the diners.


As for who the other spirits are is unknown, but there are two other hot spots of the building, which are the woman's bathroom, thought to have some kind of poltergeist type energy present, and the secret tunnel that runs under the building. The tunnel was a common feature in houses such as this during the 19th century, but for some reason this one seems to host a rather dark spirit, that makes anyone brave enough to venture into the tunnel feel more nervous than they'd like to admit.