Is Niagara on the Lake Haunted? 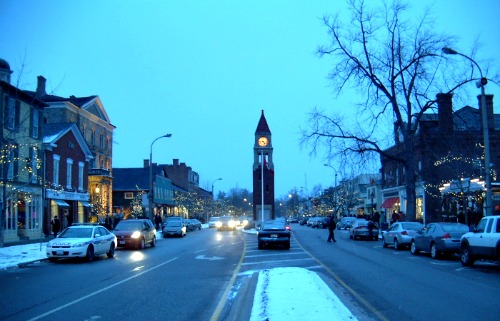 So is Niagara on the lake haunted? Well to answer that you should take a look at the towns violent past and try to find a possible reason for spirits to linger here.

It started out in 1781 and was named Butlersburg after Colonel John Butler who was commander of Butlers Rangers, but was soon renamed West Niagara to avoid confusion with Fort Niagara. Its beginnings are firmly rooted into military actions in the area and it began as a British military base and safe zone for pro-British forces escaping the United states in the aftermath of the American revolution.

A man named Lieutenant-Governor John Graves Simcoe established the town as the first capital of upper Canada, which is today known as Ontario, and renamed it Newark in 1792. However, since it was a little to close for comfort to the American border, Simcoe moved the capital to York in 1797 and Newark was renamed Niagara in the following year.

The town played a major role in the War of 1812 and was taken by American forces after a fierce 2 day battle. The town was heavily bombarded by cannons from the American fleet and nearby fort Niagara and much of it was destroyed. If this weren't a bad enough blow to the inhabitants then the complete destruction of the town later on in the war certainly was, and this destruction is often referred to in history as the "Burning of Newark".

After the war the towns folk rebuilt their ruined settlement and even managed to put up their first public school in 1859.

The towns present name was only officially adopted in 1970 when the town of Niagara and the township of Niagara were merged, though it has been referred to as Niagara on the falls since 1880 as a way to distinguish it for postal reasons.


Is Niagara on the lake Haunted?

The simple answer to the question of is Niagara on the lake haunted would be, yes, most definitely yes. The town has seen more than its fair share of bloodshed and the history that is remembered because of it runs very deep.

The town is filled with historical plaques and memorials and boasts some impressive claims to Canadian history, such as having the oldest apothecary in Canada. But all of this history doesn't seem to have passed by without leaving its mark, in the form of remembrance monuments and lingering spirits.

As you can imagine most of the spirits that people have claimed to witness here come from its military past, and tales of soldiers and battle victims dominate the ghost stories of this place.

The towns most well known ghost is possibly Sophia Shaw, who has come to be commonly known as "Sobbing Sophia". She is said to have died from a broken heart after losing her love, General Isaac Brock, who was one of the most important British figures in Canada at the time.

He died in the battle of Queenston Heights after being struck in the chest by a musket ball, and needless to say his love was devastated at the news. Its said she shut herself away from society and died at a young age, most probably from her grief. Its thought she died in a second floor bedroom in Brockamour on what is today known as Queen street, and tales of soft sobbing noises are now commonly reported, especially after dark.

One of the most unusual hauntings here tells of a strange glowing blue light which has been seen floating across town starting from the West side and moving slowly towards the East, though no one is sure who or what this is, though people speculate it may be the spirit of one of the towns past constables, which would explain the color blue.

As for the most commonly reported occurrences here they tell of everything from full apparitions of soldiers, both British and American, to the smell of cannon smoke and the soft sounds of musket fire in the distance.

There are various groups which host ghost tours in the town and tell of some chilling stories worthy of rivaling tours around any other haunted location in Canada, but the best by far is an amazing little place called "The Haunted Shop". They have a stunning set up and are definitely the place to go for your ghostly fix if your ever in the area. If you would like to see what they have to offer then you can take a look at their site by clicking the link below.