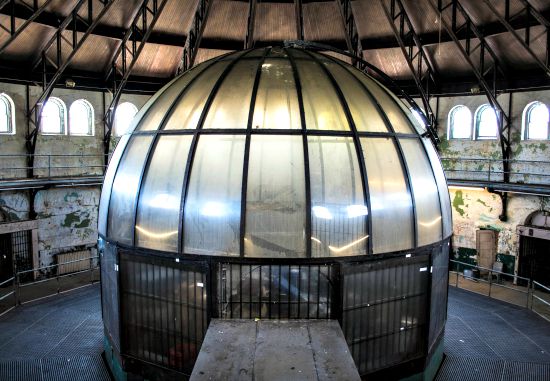 Holmesburg prison was in operation from 1896 until 1995 and has become notorious in American prison history.


The prison was an especially bad place in terms of the amount of riots and murders, especially during the 70's, but the main thing that sets it apart from the rest is the human experimentation that went on here.


For decades after it first opened doctors would carry out all kinds of drug testing, disease testing and biochemical weapons research, which often involved infecting inmates with something and documenting the results.


The prison had an exceptionally high death rate, which was mostly put down to the large amounts of riots and how violent the inmates were, but there is one common theory that doctors would infect inmates with chemicals known to be lethal, just to document the results, and then officially recorded them as being killed by another inmate.


Today the prison stands abandoned and is owned by the state, with part of its campus sometimes being used to temporarily house overflow inmates from nearby prisons.

The amount of deaths that took place at the prison are well beyond what they should be for a prison of this size, but it seems to mostly be down to how violent the inmates were.


There are a few cases of when neglect has led to a number of deaths, such as in 1938 when 25 leaders of a hunger strike were locked in an area of the prison known as the bake oven. During August the room could reach temperatures of 190 degrees and these 25 people were locked in a cramped room for 58 hours. When the doors were opened 4 of the inmates had roasted to death.


This is just one of many incidents which caused death at the prison, and over the years there have been hundreds of attacks, both on other inmates and guards, which have included the death of one of the wardens.


As for paranormal activity there is pretty much every story you can imagine, with tales of brightly colored orbs and strange sounds to more bold claims of things such as apparitions of prisoners appearing to charge at people.


One area of the prison known to be especially haunted is the disciplinary section, which is were the bake room is located. This is the area were inmates were raped and beaten and where a number of the many deaths took place, which is thought to be the main reason by what can only be described as poltergeist activity.