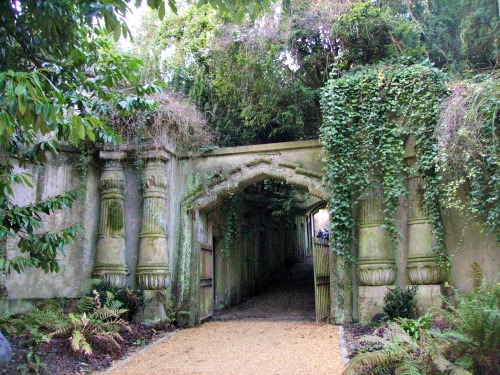 The original part of Highgate cemetery opened in 1839 as part of what was known as the magnificent seven, which was seven large burial places surrounding the inner city as the small church graveyards were unable to cope with the growing number of dead, having to cram bodies very closely and it was considered an undignified way to treat the dead, as well as being a health hazard.

The Victorians views on death led to a wealth of Gothic tombs in the cemetery and it became a particularly fashionable place for burials and was greatly admired by the community.

The cemetery had to expand over the years with the eastern section being bought in 1854 which is still yet to be filled up and still in use for burials.

The cemetery is also known for its natural beauty since its full of trees and wild flowers and has become a haven for all types of birds and small creatures.

The oldest section of the cemetery is also the most impressive, boasting impressive Victorian mausoleums and elaborately carved tombs. But to protect this area visitors may only enter in tour groups.

There are many stories about the occult past of the cemetery, with it reaching its height of popularity between the 1960's and 1980's as being the site of the "Highgate Vampire".

Highgate Cemetery is considered to be one of the most haunted places in the world, but this may be mainly due to it having a generally spooky reputation to begin with in the middle of a massive population center, which often see's the number of ghost stories related to it rise.

The most famous ghost at the cemetery is known as the Highgate Vampire. He is not a vampire in the classic sense of having fangs and drinking blood, but he has received this nickname due to the effects he has on people who encounter him.

There have been many sightings since the late 1960's and all the descriptions have been the same. He is very tall, around seven feet high wearing a long black cloak and tall top hat, but the reason he's known as a vampire is due to his eyes. People who have seen him have claimed he has piercing hypnotic eyes which people find they cannot look away from. After staring into the eyes of the "vampire" he vanishes into thin air leaving his victim feeling drained and weak.

A floating ghost of a nun is also commonly reported, though who she is and why she lingers here is unknown. But people have claimed that she walks silently between the graves, only to disappear if someone gets to close.

The other stories that come out of this place all sound to be a little "movie" like in my opinion. They include stories of phantoms and demons, such as claims of a ghoul with glowing red eyes who stares at people from behind the iron gates, and the ghost of an insane woman who chases people through the grounds with a ghostly knife.

Highgate Cemetery - Back to top