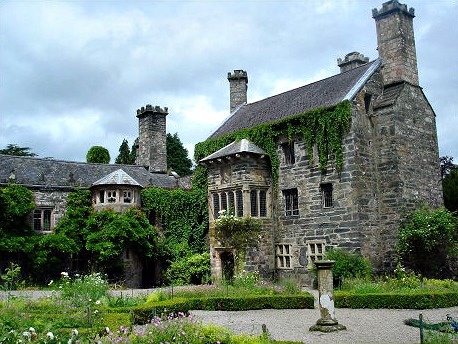 Gwydir castle was built around the early to mid 1300's. The exact date is unknown all-though the first recorded occupants who were the Coetmores built the hall range which is the earliest surviving part of the house, and they were recorded as living there when they fought in the battle of Poitiers in 1356.

After the war of the roses the castle was rebuilt in 1490, keeping only the hall range from the original structure. More additions were added in the 1540s, which incorporated reused Gothic building material from nearby Maenan Abbey, and was given a fine Elizabethan porch and gardens in the 1590s.

The castle was built on the site of an earlier defensive structure as there is evidence of there being a building here since around the year 600 AD. Also through out the middle ages there were alot of skirmishs fought in the area between the various Welsh princes, with the most notable being in 610 and 954.

Gwydir it thought to be one of the most haunted house's in Wales, even though it only has a hand full of ghosts.

The most frequently seen and most well known ghost of the castle is that of a young servant girl who haunts the north wing and the corridor between the Hall of Meredith and the Great Chamber. The interesting thing about this ghost is that the first reports of her come from the 1800's when people started to claim to see and feel her presence, so much so that this room was refered to as the "ghost room".

She has been seen as a ghostly mist like figure in white or grey who lingers in the room or hallway outsdie the door, and has often been noted to appear along with the smell rotting. Sometimes she is not always seen but people have reported the smell along with sudden temperature drops and even claimed to have been touched by her when in this area.

The story goes that Sir John Wynn seduced a serving girl when he was the head of the household and from their affair she fell pregnant. Not wanting to ruin his reputation and credibility he murdered her while she was still pregnant and hid her body in a large wall cavity. It is next to this cavity that the smell of rotting is said to be strongest.

Sir John Wynn himself ranks amongst the many other reported ghosts. He has been sighted on a number of occasions on the spiral staircase leading from the Solar Hall to the Great Chamber.

The castle is also home to a ghost dog which has been seen running around the grounds quite frequently and incredibly, its bones were unearthed in the cellar in 1995. It is also from the garden area that the disembodied sounds of children crying have been heard.

These are but a few of the most commonly reported activity from the castle with many more stories claiming everything from simple orbs, to a full ghostly procession seen at night on the Great Terrace.

Gwydir Castle - Back to top