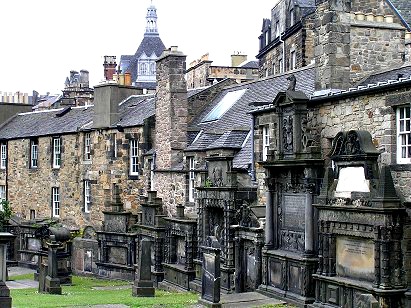 The area called Greyfriars Kirkyard is the graveyard which surrounds the church known as Greyfriars Kirk in Edinburgh. Burials have been taking place here since the end of the 16th century and a number of Edinburgh's more notable residents have been buried here.

Greyfriars takes its name from the Franciscan friary on the site which dissolved in 1559. Shortly after this the churchyard at St Giles was considered full and a record from the town council which dates from the 23rd April 1561 reads:

Because it is thoct gude that thair be na buriall within the Kirk, and that the kirk-zaird is nocht of sufficient rowme for bureing of the deid, and for esdrewing of the savour and inconvenientis that may follow thairupon in the heit of somer, it would be providit that ane buriall place be maid farrer from the myddis of the town, sic as in the Greyfreir zaird and the somyn biggit and maid close.

Because it is thought beneficial that there should be no more burials within the church [ie St Giles], and because that kirkyard is not thought to have sufficient room for burying the dead, and taking into consideration the smell and inconvenience in the heat of summer, it would be provided [by the council] that a burial place be made further from the middle of town, such as in Greyfriars yard, and the same [should be] built up and made secure.

The Kirkyard has some interesting features not seen in many other graveyards, such as the mortsafes which were low iron cages put in place over graves to deter grave robbers, which was a huge problem in the late 18th and early 19th century's.

Today the kirkyard is open to the public and can be visited at anytime of the year. It is operated by Edinburgh council and protected as a category A listed building.

Since 1998, Greyfriars Kirkyard has become home to the most well documented case of poltergeist activity in the world, but even before this it was considered quite haunted.

People have been buried here from as early as the end of the 16th century and since then the graveyard has had many ghostly tales associated with it. Before the year 1998 the stories were the same as any other haunted graveyard, with things such as spooky apparitions and the odd glowing ball of light, but things really kicked in after a certain incident occurred there.

In the kirkyard is Mackenzies mausoleum, and during the year of 1998 a homeless person broke into it to seek shelter, and this act unleashed the most active and aggressive poltergeist the world has ever seen. It came to be known as the Mackenzie poltergeist and has become the most well documented poltergeist case in the world due to how active it is and how many people it has affected.

Up to the year 2006 there have been over 350 reported attacks and 170 reports of people collapsing in the kirkyard. These attacks include things such as people being bruised, scratched and bitten. The most common place for attacks is within the mausoleum itself and also the covenanters prison.

The poltergeist has such an aggressive nature that in 2000 an exorcist named Colin Grant came to perform an exorcism on the graveyard. During the process he said he picked up evil forces so overpowering that he feared he may be killed by them if he attempted to complete the ritual, and strangely enough a few weeks later he suddenly died of a heart attack.

The case of the poltergeist and Greyfriars Kirkyard itself has featured on the programs "Extreme ghost stories" on ITV and Fox's "Scariest places on earth".

If you would like to read a more in depth account of the Mackenzie Poltergeist you can find the full case study by clicking the link below: