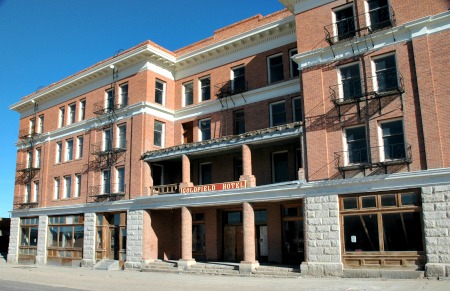 Constructed between the years of 1907 and 1908, the Goldfield hotel was built on the site of two earlier hotels which were destroyed in a fire.

Designed by the architects Morrill J. Curtis and George E. Holesworth, the building is a very impressive structure made in the classic revival style. Placed in a U-shape to ensure maximum light and windows for all of its guest rooms, the hotel was the finest building in all of Nevada at the time of its completion, with tales of champagne flowing down the front steps at the time opening ceremony.


Is the Goldfield Hotel haunted?

The most well known ghost story to come out of this hotel is that of a prostitute named Elizabeth. The story goes that when the original owner, a George Wingfield owned the hotel he would regularly visit this prostitute. Over the time he was visiting her she became pregnant and George decided to pay her to keep quite, as he didn't want his high standing reputation in the community to be ruined.

The pregnancy was kept quite for some time until it couldn't be kept a secret any longer. At this point George asked her to come into the hotel and in 109, he kept her captive until after the child was born by reportedly chaining her to a radiator.

The story splits into two different versions at this point. The first is that she died during child birth and the child did not survive, and the second version is were she and her baby survived, but then George killed her in the room and took the baby to a near by mineshaft and threw it down.

This is more than likely just an urban legend as some of the dates and versions don't quite add up, but this is the story that's thought to be behind a ghost which has been seen within the hotel. Room 109 is often intensely cold without explanation, and its within this room that the apparition of a women with long hair and wearing a  white gown has been seen on a number of occasions.

Crying has also been heard coming from the empty room and the sounds of footsteps have been heard just on the inside of the door. Whether the story is true or not there seems to definetly be some kind of manifestation here, but identifying the spirit is impossible as it could be related to the story or it could have been one of the people who died in the huge fire the town saw in 1923, when 28 blocks were wiped out and a number of people lost their lives.

The Goldfield hotel is the home to a number of other ghosts. 2 of these manifest themselves on the 3rd floor and are thought to be people who committed suicide within the hotel. Claims of the apparition of a women hanging and a man running towards a window have been reported.

The dining room is also home to particularly frightening ghost nicknamed "the stabber". He has been seen by over a dozen witnesses and appears as an angry man holding a large knife who lunges at his "victim" before instantly vanishing. He has never caused anyone harm but he has certainly caused a few people to sprint out the front door.

Various ghost hunting groups and psychics have visited the Goldfield hotel with claims of it being rich in paranormal activity, with some psychics claiming its actually some kind of gateway.

The place is famous for being one of the most haunted places in Nevada but it has been abandoned for many years with restoration still waiting to happen. The building is privately owned and no trespassing is allowed, if you wish to visit the hotel please contact the current owner, and apologies but i could not find the contact details.

Goldfield Hotel - Back to top