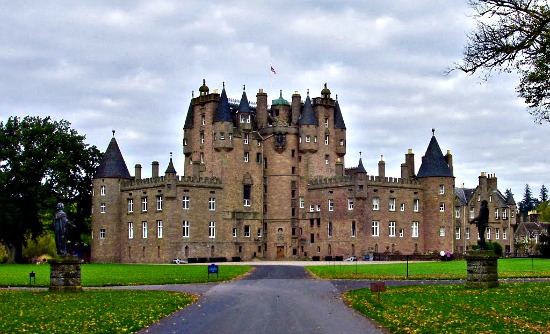 Standing on an estate 14,000 acres big, Glamis castle is one of the most impressive castles in the country and home to the Lyon family since the 14th century.

The original castle was finished in 1376 but was rebuilt as an L-plan tower house in the early 15th century. It is now home to Michael Bowes-lyon, a former army officer who is the 18th Earl of Strathmore and Kinghorne.

One of the most well known tales of the castles inhabitants is that of the 2nd Lord Glamis, Alexander Lyon. Come to be known as Earl Beardie he was playing cards with some guests when he became angry at losing and his guests refused to play another hand. When his servant asked him to stop he became enraged and claimed he would even play with the Devil himself. A stranger then appears at the castle and joins Lord Beardie in a game of cards. The stranger is identified as the Devil, who takes Earl Beardie's soul and, in some versions, condemns the Earl to play cards until the end of time.

The castle is open to the public but please check with the venue directly if you wish to visit to check any seasonal opening times.

There's a few interesting stories of this place which certainly set it aside form the typical haunting. The most well known of which would have to be the story of the monster of Glamis. He is thought to have been a hideously deformed child born to the Glamis family who basically didn't want their family's name mocked, so they locked him away for his entire life within a suite of rooms.

He lived his entire life within a few small rooms and died without ever having stepped foot outside. After his death the connected rooms he spent his entire life in were bricked up and are said to remain sealed to this day. There has even been an attempt to find were the rooms are by guests hanging towels from all of the windows they could access, only to find many did not have towels hanging from the outside.

As for sightings of the monster of Glamis they have been as varied as they have been frequent, with stories of a mutant like creature appearing right infront of people, to more subtle signs such as the sounds of breathing coming from the corners of rooms. As for monsters though nearby loch Calder is said to have its own water bound monster.

There is a small chapel within the castle with seating for 46 people. The story given to visitors by castle tour guides states that one seat in the chapel is always reserved for the "Grey Lady" (supposedly a ghost which inhabits the castle), thought to be Janet Douglas, Lady Glamis. According to the guides, the chapel is still used regularly for family functions, but no one is allowed to sit in that seat.

Glamis Castle - Back to top