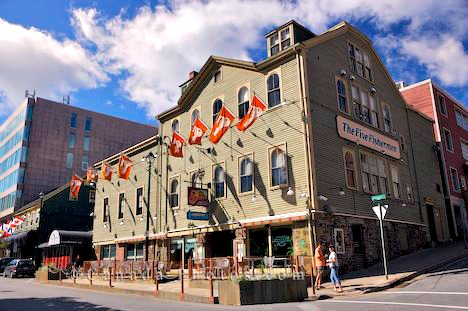 The building which the five fisherman restaurant now stands in was originally built by St Pauls church of England, which also happens to be the oldest building in Halifax. The school was the very first in the country to provide free education to its pupils.

After this the building was turned into an art school then later into a mortuary. During its time as a mortuary it worked with two of the biggest disasters in the 20th century, which was the sinking of the titanic and the Halifax explosion, which was the largest explosion in history up until the creation of nuclear weapons.

The mortuary looked after the wealthiest victims of the titanic disaster and along with other mortuaries worked as a storage facility for the huge amount of bodies from the Halifax explosion.

After the mortuary the building was used as a number of other functions but in 1975 it was heavily renovated and turned into the restaurant which can be seen today.


Is the Five Fisherman Restaurant Haunted?

The building is said to be very haunted throughout, with the main ghostly experience being the sighting of apparitions. who they are will never be known as they have been described as being made up of a ghostly mist type form with facial features being to faded to make out an identification. Plus the shear number of bodies which have been kept in the building make it impossible.

One usual thing about this buildings hauntings is when the apparitions appear they are often said to be accompanied by a strange grey mist which seems to float up out of the floor.

As for other activity at the restaurant there's pretty much everything you can imagine. Ghostly footsteps and tapping noises can often be heard coming from areas which are known to be empty. Poltergeist type activity is also commonly encountered here, with chairs and tables said to slide across the floor and glass's have been seen flying off the shelves.

One particularly scary thing you may experience here is the sound of a disembodied voice whispering your name. This to me sounds a little camp fire storyish but this has been reported a number of times by independent witness's.

The captains room, which is a private room behind the salad bar is said to be the scene of an argument which can be heard coming from the inside when its known to be empty. The words are muffled and cannot be made out but this is another thing which is said to happen regularly at the restaurant.

There is even the story of a staff member who felt an invisible hand on her face, only to later find a red hand print as is she had been slapped by something.

Five Fisherman Restaurant - Back to top