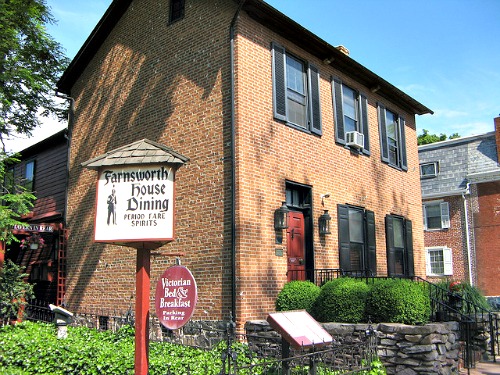 When the Farnsworth house was built exactly is unknown, but the best estimates claim it be in the year 1810.


After John F. McFarlane bought a sizeable amount of land off the first recorded owner of the land, Reverend Alexander Dobbins, he built the house straight away and is the first known owner of the house.


Farnsworth lived in the house until his death in 1851 when ownership of the house and lands passed to the bank of Gettysburg. During the American civil war the house was right on the edge of a number of large battles and acted as a hospital, treating both union and confederate troop.


The house was not completely unscathed from the fighting, with the first owners to move into the house after the war counting a total of 135 bullet holes in the walls, which gained it its name of "the sleepy hollow inn" when it was owned by the Black family.


Since 1972 the property has been owned by Loring and Jean Shultz who have opened it as a bed and breakfast. The owners like to talk about the paranormal activity that goes on here and also offer ghost tours of the property.

Since the Schultz family has owned the property they have made many claims about how active the spirits are, with there being a maximum of 16 ghosts at one time, with each having their own unique name and personality.


Most of the ghosts seem to come from the mid 1800's, with the majority of spirits being those of soldiers who died during the civil war when the building acted as a hospital, though they also include the ghosts of children and nurses.


As for how the spirit manifest themselves there are all kinds of claims, from the feeling of being "tucked in" when lying in bed at night or the strange smell of Cheroot cigars floating down the hallway, this place really does have it all.


The most active area of the building is the Sara black room, which has seen everything from poltergeist activity to the full apparitions of various spirits walking round the room. This area is thought to be so haunted that people have taken many photos from the outside of this room, and have captured some interesting things, with the most common being a mist like figure standing in the window.


The owners would surely like to play on the Inn's haunted reputation to drum up business, which may suggest that a lot of the stories aren't true, but due to how many people have captured things on camera and the number of claims of ghostly activity from the guests, this seems like one of those places that just might be truly haunted.