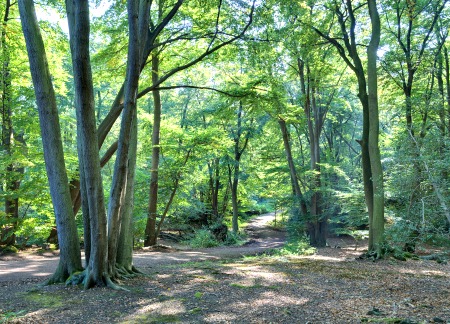 Normally i like to include a little history on the locations featured on this site, but Epping forest doesn't really have much in the way of locations history, as since records began there has always been a forest covering this area.

Records of use of the forest date back to the iron age, and include stories of Norman invaders and Roman battles, and because of its location to the nations capital, tales of highwaymen and robbers are rife.

The forest has a few famous tales of the highwaymen and criminals that used to hide out here, with the well known robber "Dick Turpin" using a cave in the High Beach area of the forest as his main high out for most of the time he was on his crime spree. Also the famous London gangsters called the Kray twins used the forest as a place to hide the bodies of some of their victims.

Today the forest sits in the Epping national park area and covers over 6,000 acres, which includes woodland, grassland, rivers, bogs and ponds, as well as being the home to a site of special scientific interest. It is open to the public all year round.

The forest is a favorite for ghost hunters and fans of the paranormal and is thought to be the most haunted forest in England. Many ghosts are believed to reside here and the UK's most well know ghost hunting show "Most Haunted" did one of their very few live investigations here in the hope they would catch something, which they certainly did, believing they had come into contact with the spirit of Dick Turpin himself.

He is the most well known ghost of the forest, with most people claiming to have had encounters with him, but due to the huge number of people who have died here over the years this is impossible to verify which if any encounters were with his spirit.

One thing the forest has over most other haunted places is the age of its first ghost. Many believe the forest to be haunted by the legendary Celtic queen Boudicca, who lived around 60AD. She is thought to be responsible for the tales of mist like chariots racing down the paths of the forest, which has been reported many times.

She is not the only ancient ghost here, with a number of other claims of a man wearing a tricorn hat and long cape atop a large black horse.

Poltergeist activity has been reported throughout the whole forest, with people claiming everything from things being thrown at them to being pushed hard enough to send them to the ground, all from an unseen force.

As for other individual ghosts there are many, including the Wake arms round-about to be a hotspot were drivers have reported a man who runs out in front of cars only to stare into the drivers eyes before fading away right in front of them. Also a headless horse man and horse drawn coach have been seen in this area.

The area around hangman's hill is also the scene of blood curdling screams during the night, which people have alerted the police to a number of times, though they never find the source. There is a local myth that says if you park you car in neutral on the hill, it will appear to roll slowly up the hill towards the tree where people were hanged.

Epping Forest - Back to top