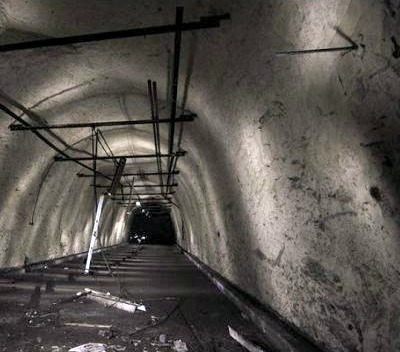 The Drakelow tunnels were constructed during the 2nd world war as a secret factory for Rover, who made engines for the RAF during the war. Formerly known as Drakelow underground dispersal factory the facility was also to be used as one of Rover back up factories should any of there normal above ground facilities be destroyed.

There was plans in place to move the Head quarters to a site at Lawford Heath, though this never happened and the site was decommissioned and sold in 1993.

The site was sold to a private owners who intended to change the site into housing and commercial properties, though this didn't happen as the owners met with fierce opposition from a preservation trust who saw the site as having significant historical importance.

How long this will last for though is unknown and its thought the owners still intend to change the site to serve another purpose should they win the legal battle.


Are the Drakelow Tunnels Haunted?

There's thought to be up to 6 ghosts who haunt the tunnels, as this was the amount of people who have officially died in them. The deaths come from the construction process of excavating the tunnels and from human error which led to a death on the factory production line.

There has been a steady stream of reports of paranormal activity from the site with the most well known spirit being named Oswald. He is one of the people who died in the building of the tunnels and seems to wish to linger here. He is known to be a rather mischievous spirit who likes to scare the visitors by touching or gently pushing them. He has also been known to move objects and it is often reported that things have been moved around so much that the place has been suspected to have been broken into during closed hours because of Oswald.

The spookiest story of the tunnels comes from the years it was decommissioned and abandoned. The site is rumored to have been used by cult for satanic worship for most of the time it was officially out of use, and the story goes that whoever this cult was managed to "open" something down in the tunnels.

Various psychics who have visited the site claim to have detected a spirit of great evil, most often near the canteen area, though this spirit has not actually hurt anybody yet.

Orbs and strange mists show up on pictures taken throughout the tunnels and the faint sound of wartime music has been heard playing in areas which are known to be empty, which is especially odd since the site has been without electricity for some time.

Drakelow Tunnels - Back to top