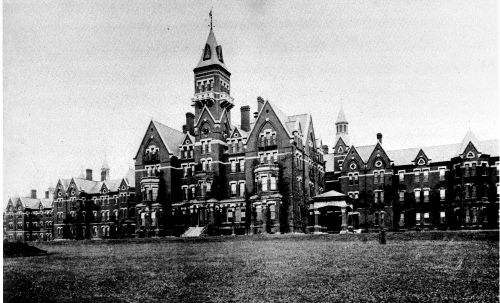 History of the Asylum

The Danvers state hospital took 4 years to build and was completed in 1878 at a construction cost of $1.5 million, which was a massive amount of money at the time.

It was designed by Boston architect Nathaniel J Bradlee as a solution to the nearby asylums being dangerously overcrowded, and after the closure of the south Boston asylum at the start of the 1870's, the state was in desperate need of a new mental hospital.

Built quite far away from the nearest urban area the hospital became the site of experimental and training programs, with nurses being trained here from 1889, and the addition of a pathological laboratory in 1895. The hospital also operated a school clinic to determine mental deficiency in children during the 1920's.

After the 1960's the hospitals patient numbers started to decrease due to alternative methods to treating the mentally ill and it finally closed its doors on the 24th of June, 1992 due to be severally outdated and lacking a proper budget.

After being bought and renovated by a company called Avalon Bay Development, who demolished most of the buildings with the intent of turning them into apartments. Many of the main buildings were destroyed and the others only survived by being turned into shells, while the new buildings were built within them, keeping the shells as the outer of the buildings for their gothic designs.

There isn't an asylum that existed in the late 1800's that would have been beneficial for you to be there, no matter how ill you were.


The problem with these kind of places was a simple lack of understanding about the causes and treatments to counter the causes of mental health. Much of the treatment that went on here was experimental or based on the word of some "top doctor" across the state who probably based whatever success he had on treating someone as fact instead of luck.


This asylum is thought to be the birth place of the treatment known as the lobotomy, which incase you are unaware involved holding a thin chisel against the frontal lobe of your brain, and then giving it a good wack with a hammer to drive it through the skull and effectively destroy the front part of your brain, which often turned people in to vegetables if it didnt kill them.


With things such as this and leaving people in straight jackets while administering shock therapy, there's no wonder that some tortured spirits couldn't leave this place.


As for paranormal activity it seems to be spread across the whole site, but since all the actual treatment rooms and patients living spaces have now been turned into nothing more than a shell, there isn't really a specific area they could haunt.


They seem to make themselves known mostly in the form of apparitions, with claims from the people who have stayed in the apartments of seeing gown clad people standing in the hall walls staring at the floor, as if vacant of any thought, though upon being approached they always seem to vanish in the blink of an eye.


There's also a few claims of poltergeist activity here, and im my experience of writing about haunted places, these always seem to be more common in places people were effectively tortured in, which would give good reason for them to be here.


The stories of this type of activity are quite typical, with the odd plate or random object being hurled across the room, though strangely enough this always seem's to happen when there is no one there to see it, with them only being alerted to the sound of the smash or returning to find a book crumpled on the floor on the other side of the room.